Mystery Spin Deluxe Megaways is a classic fruit-themed slotsuk game from Blueprint Gaming released to casinos in June 2019. This slot game has 6 reels and up to 117,649 ways to win, as well as a 96% RTP. The volatility is in the medium to high range, while the bet allows between 10 pence and 10 pounds per spin.

You can win a maximum 10,000 times your stake spinning the reels of Mystery Spin Deluxe Megaways slot. The slot also has a Mystery Symbol feature that changes a randomly selected symbol for some big wins. There’s the In Sync feature where the 6 reels can be tied up with the same symbols appearing on them all.

The Mystery Spin feature allows only mystery symbols to appear on the reels in the In Sync feature. Sit and enjoy this Mystery Spin Deluxe Megaways slots review, or go right ahead and play on Slots UK.

Mystery Spin Deluxe Megaways has a fruit theme that has been revamped to serve a more modern purpose. The graphics blends old-style and new-style classic graphics, reminding us that fruit slots are still a thing. Top-rewarding symbols on the reels are fruits such as Red 7s, Watermelons, Oranges, Grapes, Lemons, and Cherries.

The low-rewarding symbols are card suits such as A, Q, K, J, and 10. The soundtrack is quite upbeat and fast, capable of immersing you much deeper into spinning more than you wanted. The Mystery Spin Deluxe Megaways mobile version is pretty cool, but megaways are better enjoyed on desktop versions. 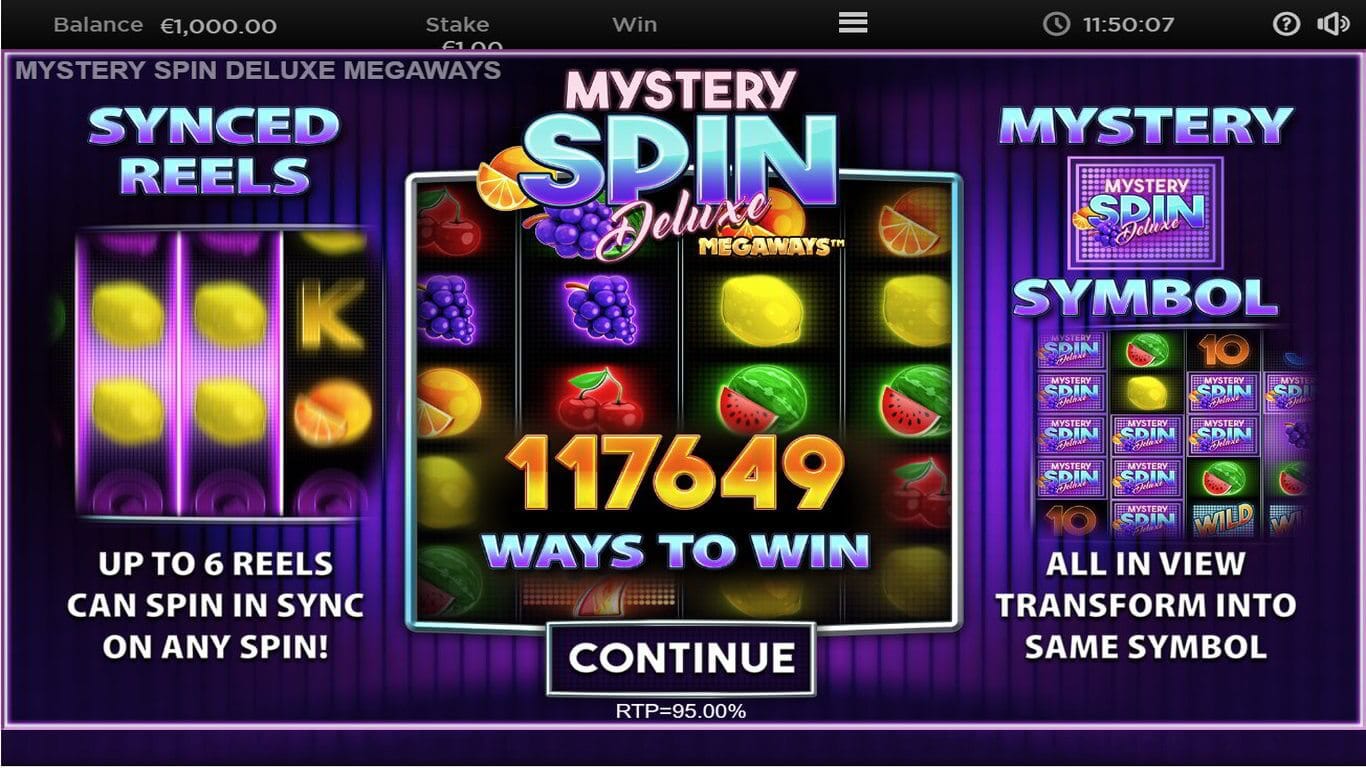 Players who have a thing for fruit slots would have ample fun on Mystery Spin Deluxe Megaways slot. You can start playing on Slots UK by pressing the ‘Play Now’ button to sign up or sign in. Afterwards, complete your profile update as follows:

The account update should take less than 10 minutes to complete on Slots UK. Then proceed to choose the games that appeal to you and play from our fruit machine games catalogue. But if you want this slot, you can return here and click the ‘Play Now’ button and follow up, thus:

You should go for the Mystery Spin Deluxe Megaways demo first before staking real money. You should also check out the statistics table in the next heading. 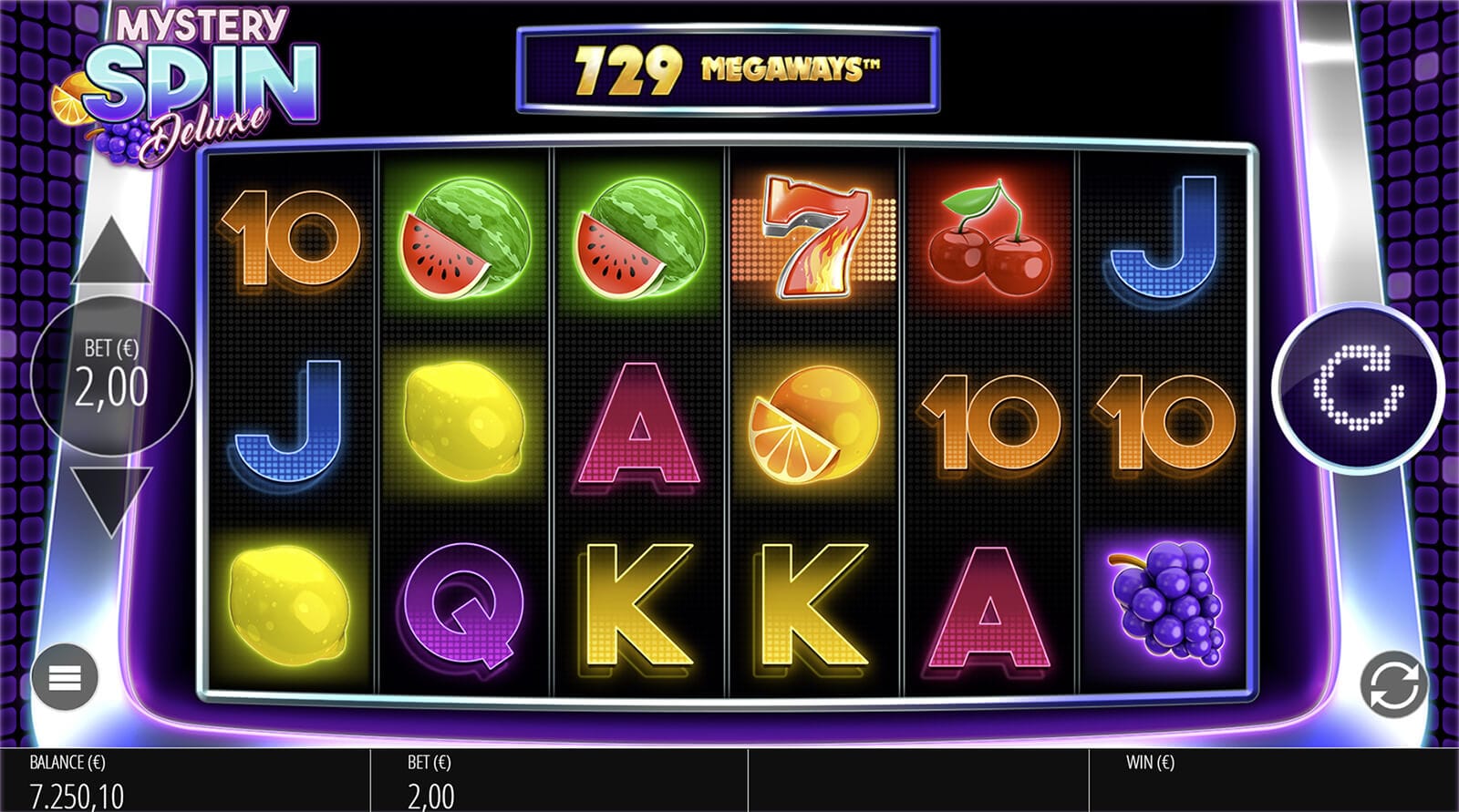 RTP – Mystery Spins Deluxe Megaways comes with an RTP of 96%.

Volatility – You would find a medium to high volatility in this slot.

Minimum and Maximum Bets – The least you can stake here per spin is 10 pence, while the most are 10 pounds.

Bonuses – You have the Mystery Symbols, In Sync, and Mystery Spin features.

Wilds and Scatter – Wild and scatter symbols are available.

Maximum payout – You can win a total of 10,000 times your stake on this slot.

Exclusive Symbols – In addition to regular symbols, wild and scatters symbols will be seen on the reels.

Kindly make recourse to the Mystery Spins Deluxe Megaways statistics table below to help you make an informed decision.

During the base game spin, this feature randomly comes to life by changing a random symbol. The mystery symbol will pick up a random symbol and transform it into that symbol for bigger wins.

The reels (up to 6) will become identical and spin in the same manner with the same symbols on them. This should result in a higher winning potential.

This feature is activated at random, with only mystery symbols appearing during the In Sync feature. The Mystery Spins Deluxe Megaways free bonus game is simple and seamless enough for you to win pretty fairly.

Last Thoughts on this Online Slot

The huge payout of 10,000 times your stake is sufficient motivation to start spinning the reels of Mystery Spins Deluxe Megaways. Blueprint Gaming has kept every aspect of the gameplay as straightforward as possible, and it works to your advantage. We rate Mystery Spins Deluxe Megaways 6/9 and recommend you play on Slots UK alongside other games such as Lucky Pirates Slot.