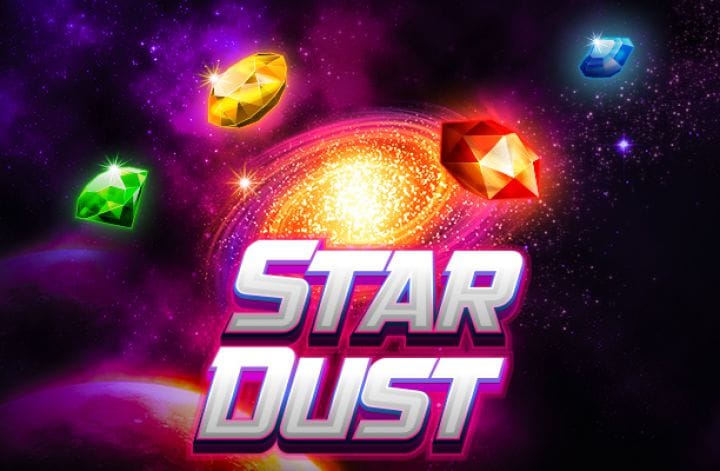 Ready for a burst into the stars where all things are possible! Stardust by Microgaming is a 5 reel, 40 payline slots UK with a retro arcade vibe. Features players will enjoy in the game include stacked symbols appearing in the main game and later super stacked in the main feature.

There’s also a Free Spins feature which starts off with 13 free spins and a Re-spin feature, that awards a re-spin on the 4th and 5th reels to increase your chances of landing a 5 symbol winning combination. Stakes in the Stardust slots game start from 40p to £100 per spin on all Android and iOS mobile, desktop and tablet devices.

How to Play Stardust Slot

Microgaming Stardust slot has a retro feel to it that will remind true NetEnt fans of Starburst. The slot has a simple design with the background being a deep purple with clouds of fog- a space setting ideal for the theme and title of the slot. There are 40 paylines in the base game which can be made more entertaining with the use of casino promos.

Symbols on the reels include a variety of gems of different colours; green, blue & orange, card values A, J, K, Q, 9 & 10 and a Stardust symbol. The Stardust symbol appears stacked on all reels. For more online slot games sign up to Slots UK online casino today!

Free Spins feature - when 10 gems land on the reels, they will activate the Free Spins feature. Every time a gem is collected on the reels, it ends up collected in the Stardust Meter. These gems will be added to the starting win of the free spins. You can win up to 13 free spins total and even better, the number of paylines will end up increasing to 1,024 during the feature.

Radiant Respin feature - during the Radiant Respin feature, the 4th and 5th reels re-spin to add to your winning potential. This usually occurs when a 3 symbol win occurs with both of those reels re-spinning once. When a 4 symbol win occurs, the 5th reel will re-spin once. The only downside to this Stardust slots feature is that you can’t re-trigger it. 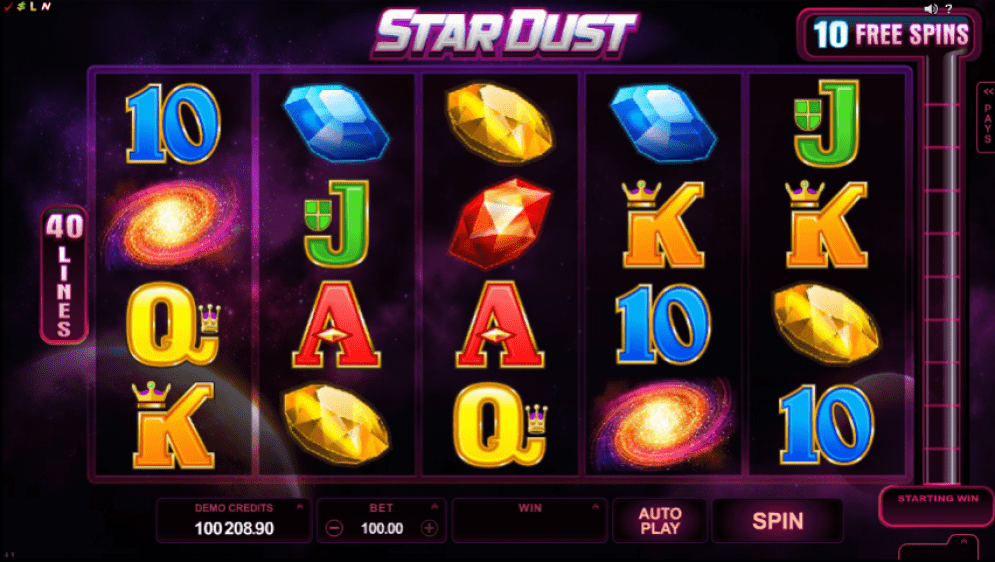 Microgaming is a highly respected online casino software developer because they’ve been in the game for more than 20 years now and are the makers behind the Stardust slot. Their success began right in 1994 when the company was launched. Their first online casino, the Gaming Club still uses Microgaming software more than two decades later.

Microgaming has built up an impressive selection of online slot games featuring table games like baccarat, blackjack, roulette, sic bo, etc. However, they tend to focus on their highly graphical online casino slots like Stardust. Microgaming has released over 300 of the total 600 games available.

Some of their most popular progressive jackpot slots include Major Millions, Mega Moolah and Lotsaloot. Mega Moolah has paid out the highest jackpot win ever of 16 million pounds. They have movie themed slots that are extremely popular including; Lord of the Rings, Tomb Raider, Hitman and Batman. They continue to have new releases every other month so you will definitely not be lacking any options here at Slots UK:

You can find all these and more on Slots UK online casino once you sign up and make your first deposit! 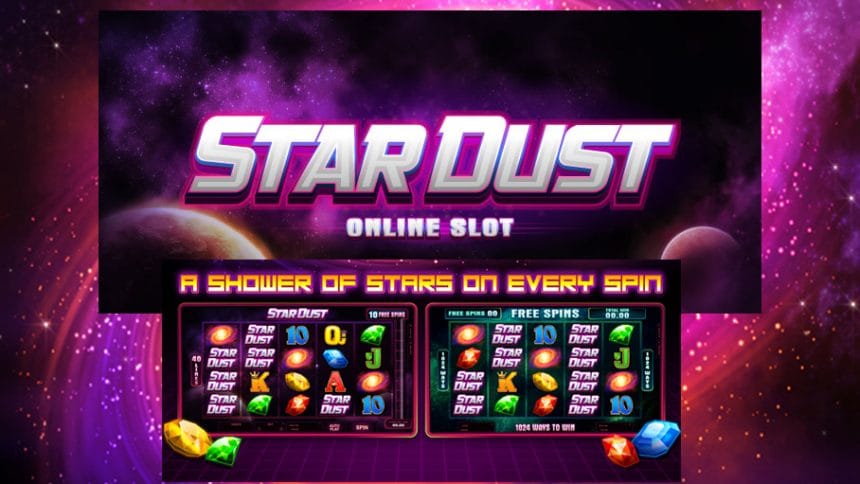 The Verdict on Stardust Slots

The Stardust slot by Microgaming is an enjoyable fast-paced casino slot game. The design and gameplay is simple and the rewards on offer are quite spectacular. First off, Microgaming has included 2 exciting features in this slot i.e. the Free Spins feature and the Radiant Re-spins feature. You get to receive up to 13 free spins where you get to win over 1,000x your stake on every single free spin round.

Stardust by Microgaming will be enjoyable for every beginner slot player and will be a refreshing change for the casino slot OG’s. It’s worth checking out if you enjoy simple, fast paced slots that promise big rewards. If you’re lucky, the free spins feature will have you walking away with more than 1,000x your stake. Another slot that is filled with riches is the all time classic Slingo which can also offer you plenty of ways to get to top!