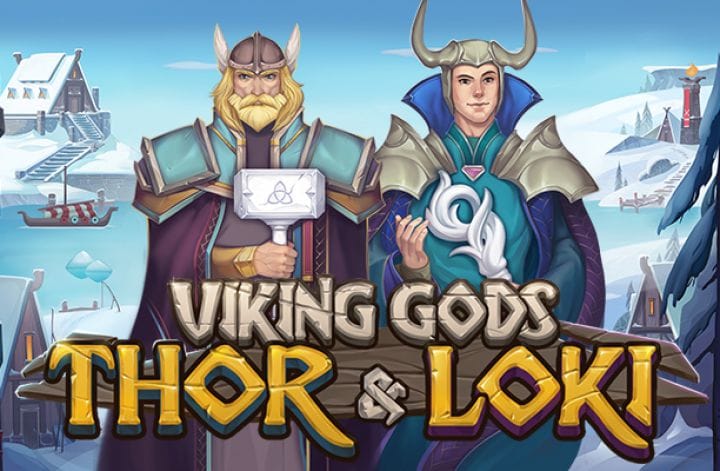 Viking Gods Thor and Loki is an incredible uk slots game from Playson. The name is used suggestively by the designer to mean the slot is based on norse mythology. It’s no doubt that Thor and Loki are among the popular gods.

This slot features two prominent gods found in norse mythology. The reels of this online slots casino game are framed fitted with steel hinges which are set against the Viking Village. You'll find a colourful theme and design in the Viking Gods slot. Viking Gods’ design makes this game lovable and it features gorgeous and stylized graphics.

The slot contains an attractive bonus round that can result in big payouts, which is the reason why so many players have chosen Viking Gods to test their luck. So sign up to Slots UK today to play the Viking Gods slots or some of our other top online slots games.

How to Play Viking Gods Slot

Viking Gods is an interesting video slot that comes with 5×3 reels and 15 paylines. It’s powered by Playson Software, and comes with an RTP set at 96.88%. From a gambling point of view, this is a great percentage. When it comes to volatility, this slot is medium variance slot so, expect short dry spells.

The theme fits the norse gods excellently and presents them in a more entertaining manner. Meet the warriors who are shown drinking with their priests or holding weapons. Again, even the symbols are superbly designed and the game is packed with impressive animations.

The Viking Gods slots game is not complicated in a way that will confuse the player. The players can enjoy the fancy action from the five reels. It excites to know that you got 15 paylines behind your payouts.

Before you consider spinning the reels, know that you need to place your stake. The least you can stake is 0.15 credits as compared to other slots that start from 0.10. On the other hand, the maximum credits per spin are 90 which will suit high rollers perfectly.

The Viking Gods slot comes with a variety of norse themed symbols, which can provide you with various wins. The low-valuable symbols include pink and blue icons that resemble Viking jewellery and rune stones. These crystals can offer you 16.66 times your total bet for every winning line in the main game coupled with free spins, and bonus features, among many others.

The high-valuable symbols include the Ice Wolf, the Ice Wrath and W logo (wilds). There also exist a wild that’ll substitute all symbols except for the scatter symbol. Finally, the last symbols are represented by the two major gods, Thor and Loki. It’s from these two symbols that extra features will be activated in the game.

Viking Gods Thor and Loki comes with a very interesting bonus round. The two god symbols - Thor and Loki - can land only on the central reel and cover either one, two or the entire three positions on the reel.

When it comes to the Thor free spins, the serpent wild will surely land on each spin. You must pass three levels through gathering blue crystals on the reels. The best thing is that each crystal draws you closer to the next step.

After that, the serpent wild begins to operate in one position on the reels, the initial level attains 2 by 1 reel, the second qualifies for 2 by 2 wild and the last level makes it a colossal 3 by 3 wild. Every brand-new level will add one, two or three free spins respectively.

For the Loki free spin bonus, it gives you 10 free spins to play with Sticky Wilds. Similar levels play and levels unlocked by gathering Pink crystals. Now, every unlocked level raises the number of times that the wild will stay on the reels.

For the first time, it involves a regular sticky wild with only one lock, the second includes two locks and finally the third with two sticky wilds plus two locks while the fourth comprise of two sticky wild coupled plus three locks. It’s worth noting that each spin in Viking Gods calls for wilds to be added on the reels. 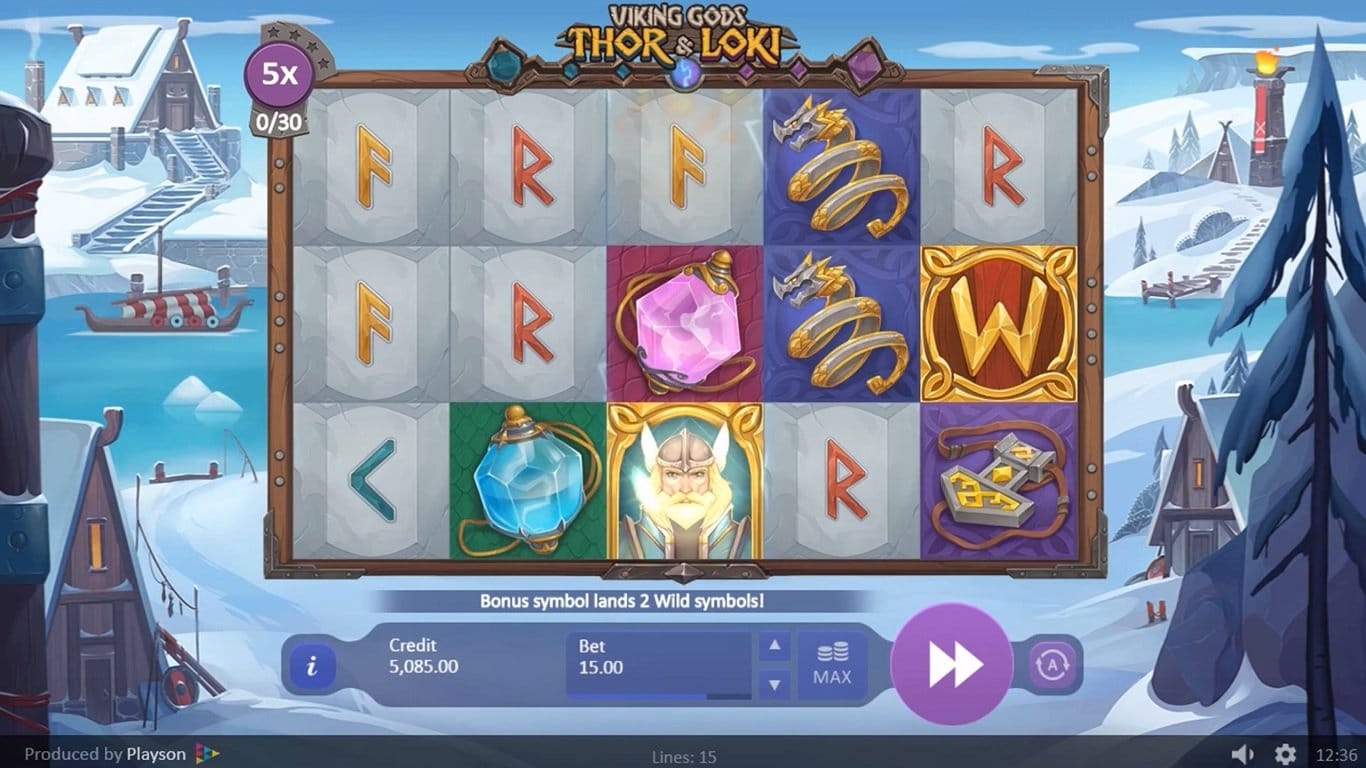 Playson is not a strange name when it comes to the gambling market. It’s a very popular online slots games software provider with many games in their store, games like the aforementioned Viking Gods slot.

Their slots can be available in many of the popular online casinos and the best news is that they are working tirelessly to increase their portfolio. Playson slots are of high quality, they are becoming more popular each new day across online players and it’s capturing more loyal players quickly.

Playson games are HTML 5 which means that they can be accessed on the computer and mobile devices. This gives them the most flexibility and allows their integration to the various software platforms. This way, the games are available for instant play and download mode.

Besides the Viking Gods slot, other titles by Playson at Slots UK include: 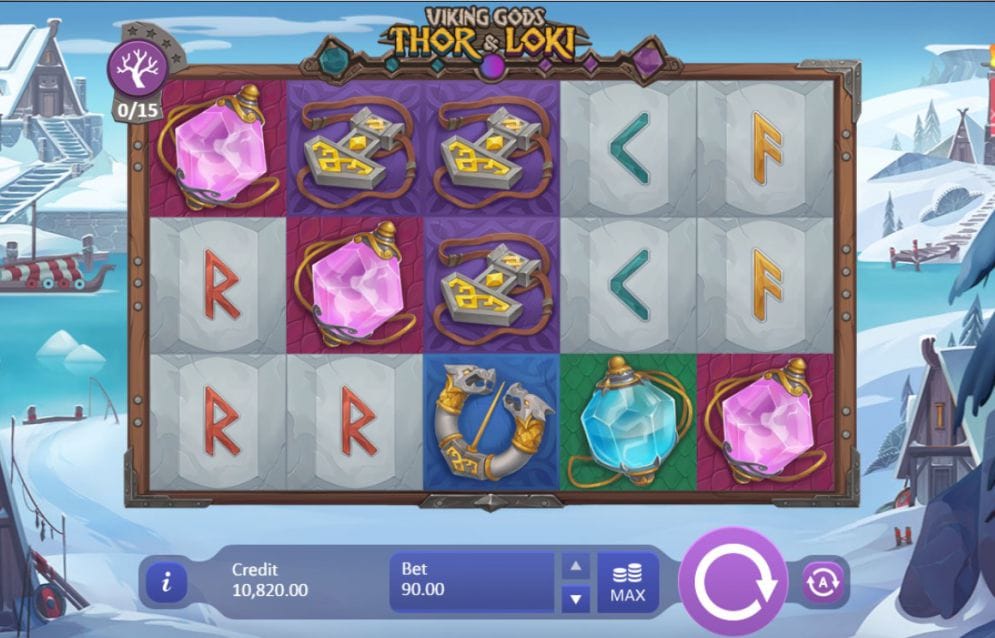 Verdict on the Viking Gods Slots

Viking Gods feature a colourful theme as well as gorgeous graphics that make the video slot appealing. Besides, the game is jam-packed with great bonus rounds, the paytable is rich enough and a gamer can land on big number wilds on the reel hence increasing the chance to win big. However, it has a higher house edge compared with other games though this doesn’t make it bad.

Otherwise, the Viking Gods slots game flows smoothly without hitches. So if you’ve been wondering where you’ll ever find an action-packed video slot based on norse mythology, look no further than the Viking Gods Thor slot that can be played at Slots UK today.