The worms have had their fun on games consoles, but now it's time that they got their online slot. Released by Blueprint Gaming in 2016, the Worms Reloaded slot game brings all of the joy of the video games to the casino community. With medium variance, Worms Reloaded casino slot games can be a tricky beast, but that is to be expected from these crazy characters.

Worms Reloaded slots UK online game comes with four bonus features that reference the worm’s origins, with a free spins round making an appearance for some variety. You can bet anywhere between 20p and £500 per spin, and this slot has a lower than average RTP rate and stands at 92.66%. The game looks just like its source material, making this a great extension to the worm’s franchise. Make sure to check out Worms Reloaded slot on this slot site UK.

Fans of the worm’s games will be familiar with their shtick. Each worm is bred to destroy their enemies, and they do so using a variety of guns and explosives. That is why the symbols in the Worms Reloaded slot feature an array of weaponry, from rocket guns to grenades. The game’s logo is the highest paying symbol and rewards players with 500 coins for five across a pay line.

So, how does the Worms Reloaded slot game work? Follow the process below to play the game.

The card royals from A-J are the low-paying symbols, whereas the weaponry will score more. 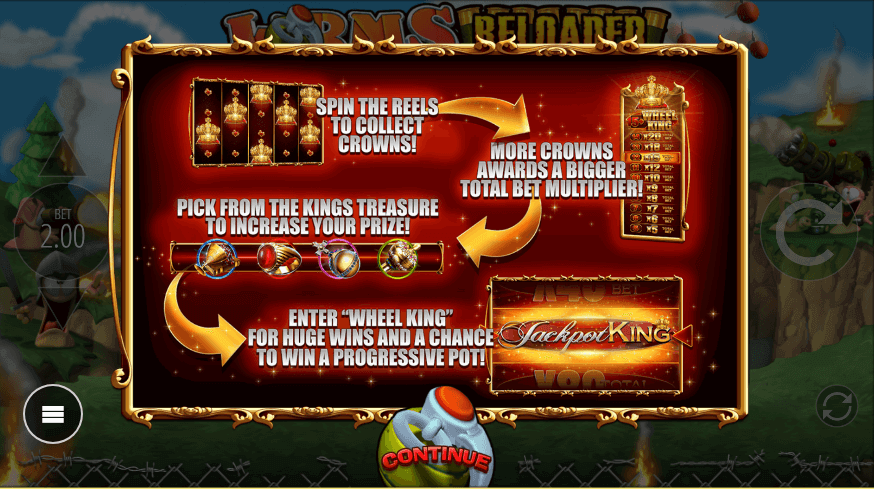 What to Expect from this Slot

Slots come in all shapes and sizes. Worms Reloaded is set out on a 5x3 grid, which means there are five reels and three rows. The betting range is set between 20p and £500 per spin. This range is huge and means that players can set extremely high stakes when they bet the maximum.

However, this might not be wise when considering the RTP rate and variance. The variance is medium, meaning that the pay lines that form can feature any symbol value. There is no predicting the outcome. When we look at low variance slots, we can safely assume that pay lines will form frequently and small payout amounts. This means that players are safer when making larger bets as there is a higher chance of them receiving a pay-out. With medium variance slots, like Worms Reloaded, things are a lot less predictable.

Then we have to look at the RTP rate. In Worms Reloaded, the RTP is 92.66%. This is far below the average for an online slot and gives the online casino a whopping house edge of 7.34%. Discover more about Worms Reloaded in the table below.

*All values are subject to change at any time.

The worm’s video games are synonymous with chaos. In Worms Reloaded, that chaos presents itself in the bonus features. First off, there are four main game features that trigger when you land the game's logo on a spin. This logo explodes and will activate one of the following features:

Make sure to try other titles similar to Worms Reloaded slot, including: 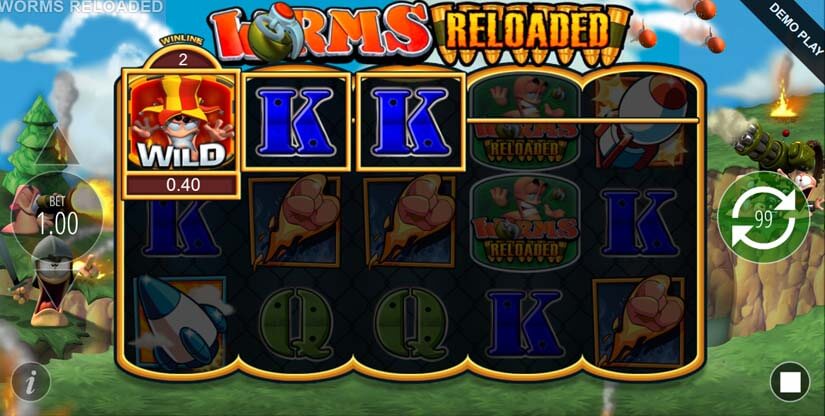 To get involved in the mayhem of Worms Reloaded, players will need to register an account with Slots UK. Completing this process will grant you access to all of our site slots, and players who sign up with a £10 deposit can participate in our welcome offer (Full T’s and C’s Apply).

You can start a game of Worms Reloaded by finding the slot in our games library, or return to this page and click ‘Play Now’.

Who Developed this Slot?

It is always great when an existing franchise is represented well in a slot game. Worms Reloaded captures the spirit of the worm’s games in both its graphics and gameplay. A rare feat.

Blueprint is the developer behind the Worms Reloaded slot, which usually favours more traditional slot cabinets. However, they’ve pulled out all of the stops to bring us Worms Reloaded on desktop and mobile devices, as they have previously done with:

The Bottom Line on Worms Reloaded

Worms Reloaded is the perfect example of a branded slot done right. This slot’s gameplay takes much of its inspiration from the chaotic nature of the video games, and the 2D graphics are mirrored perfectly. There is even a total of eight bonus features to dive into.

You will find it hard to get bored with Worms Reloaded, especially when you play at Slots UK. So make sure you also check out other exciting titles, such as Win Escalator Slot Game.