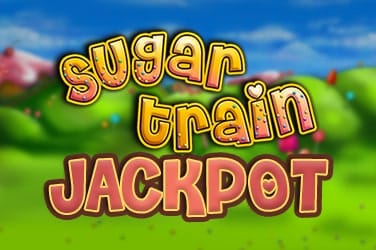 Eyecon has developed a sweet slot that gives out even sweeter prizes.

Set in a magical sugary landscape where lollipops grow from the ground and a small train transports piles of goodies around. With an array of sugary symbols that cover the reels, the goal is to match the symbols with hopes of unlocking the bonus features and earning great cash prizes here at SlotsUK the right place for slots UK!

Sugar Train is a high volatile 5-reel, 25 payline video slot by Eyecon. The sugary theme comes with unique bonus features – there is a Rainbow Pick feature that rewards players with up to 100 times your total bid. The other attraction of this slot is the Gumball Bonus which can award up to 500 times your bet. The third bonus feature is the Free Games feature that rewards up to 25 free spins at first with 400 spins up for grabs overall. Wagering on Sugar Train starts at 1p a spin with adjustable paylines with the maximum bet being £50 per spin.

The jackpot version of the already popular slot is the icing on the already pretty tasty cake. This version of the slot has three progressive jackpots which increase as you play. In addition to the already exciting features, this version takes the cake. The gameplay for this slot is rather easy and straightforward, a classic feel with a modern twist – various bonus features.

If you are in the middle of an attack of the munchies then this slot may not be a good idea since it’s just as sweet as it sounds. Just playing the game will have you thinking of sweets, cake, and lollipop-shaped trains. The theme isn’t the only sweet thing about it as it offers bonus features that award big prizes and slot promotions in this version of the slot, there are even jackpots to be won. Visually speaking, Sugar Train is nicely done as it manages to stay just shy of a saccharine overload.

If you decide to hop aboard the sugary express then be prepared for the train track and tunnel background, as well as, the colourful visuals that are explosions of colour. The train tracks and tunnel look like they’ve been made from icing sugar; these sweet confections are enough to give anyone a toothache. The soundtrack is the usual generic affair. It may be catchy, but you do have the option of turning the sound off when you need a break.

The 5 reels are decorated with a total of 10 symbols. These include jelly babies, doughnuts, lollipops, gobstoppers, sweeties, cupcakes, hearts, and frogs. The highest paying symbol is the Sugar Train chocolate bar – if you can get 5 of these on the reels then you’ll win 200x your bet.

This slot has the standard wild and scatter bonus symbols. The wild is represented by the yellow gummy bear which has the ability to replace any or all other symbols aside from the rainbow scatter. Landing enough wilds can also unlock one of the bonus features.

Sugar Train Jackpot has three jackpots that range from Mini to Maxi. These are triggered randomly and the amount that you can win is not dependent on your stake. Since it’s rewarded randomly, you don’t need a specific winning combination to unlock it, nor do you need one for slot games online in general, as most games comes with a free demo version.

When it comes to the Free Games Feature, if you can land between 3 and 5 gummy bears on the reels in the same spin then you’ll be given between 15 and 25 free spins. This feature can then be retriggered up to 15 times which equals the chance at winning 400 total free spins.

The Rainbow Pick feature is activated when you land between 3 and 5 rainbow scatters, earning around 3 to 5 options to choose from within this prize pick bonus. Each pick could reach the value of 100x your total wager.

When it comes to the Gumball Bonus feature, it’s activated when the red symbol on the Gumball Station lights up. When this happens, railway carriages appear under the reels and a claw then attempts to retrieve gumballs from the carriages. The prize for each one could come up to 100x your stake. The very top prize on offer is 500x your total stake. 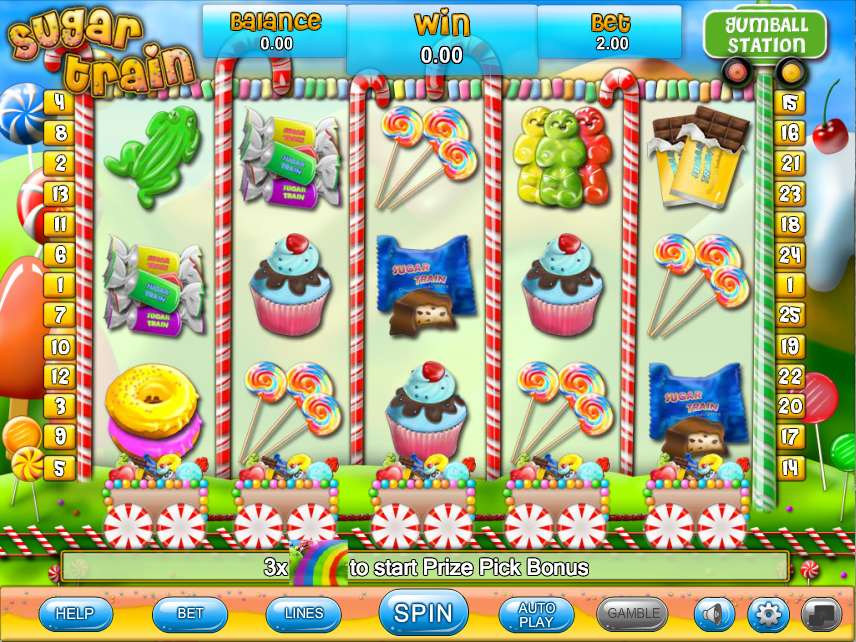 The range of features within this slot makes it well worth a look. The tasty action is unexpected but welcome as the features offer you bigger prizes and additionally extend your play time. Toothache or not, you cannot deny that this slot has a bright and colourful design that provides good fun.

Other Games by Eyecon the Sugar Train Jackpot Slot Developer

Established in 1997, Eyecon Gaming is an Australian based company that has successfully delivered gaming systems – both land-based and online versions. These include live gaming, slot game design, and custom game development. They have also delivered integration projects such as television multimedia integration, LAN, and internet multiplier immersive games, online casino management systems, and slot gaming systems and environments.

As you can see, this developer keeps busy and in doing so has made quite a name for itself. Since Eyecon is a systems provider to the gaming world, all products developed by the company are audited according to government regulations in five jurisdictions. Since the launch of Eyecon’s first-ever slot, Temple of Isis, back in 2003 Eyecon has been going strong and has created a couple of hits that have remained strong. Their highest-rated slot to date, Fluffy Favourites, even spawned a successful slot franchise.

Other popular titles from the Eyecon’s portfolio of slots:

Although fun and easy-going, this slot offers slightly more when it comes to increased complexity and improved design. This slot is still a little cartoony but that adds to the charming aspect of the game.

It’s not trying to be pretentious or show off overly much, the only thing it definitely is trying to do is make you hungry. And if you are hungry for more, why not give the wolf themed Spinsane Slot a spin while you are at it!