There’s a special bonus feature where a genie appears out of a golden lamp and awards small cash prizes awards going up to 500x your bet, 10 free spins where raining wilds occur regularly and 6 free spins where sticky wilds land throughout.

If you think this magical Arabian spirit can make all your jackpot dreams come true, then start your spins for stakes starting from 50p to £250 a spin in the 3 Genie Wishes slots game.

How to Play 3 Genie Wishes Slot

The action in the 3 Genie Wishes slot by Pragmatic Play is set against a sun-kissed village at dusk. Symbols you will find on the reels include low rewarding card values A to J symbols, a monkey, parrot and 3 Arabian characters who offer top payouts of 150, 200 or 300 coins.

There is also a wild symbol in the game that can substitute all other 3 Genie Wishes symbols on the reels except the scatter. When the genie symbol appears on the reels, he lands fully stacked and turns all the reels wild.

The genie can appear on any of the 5 reels or on multiple reels on a single spin in the 3 Genie Wishes slots. The magical golden lamp in the game acts as the scatter. It can appear on odd numbered reels 1, 3 and 5 on a single spin. Players will win payouts of 20, 100 or 400 coins when the 3, 4 and 5 scatters land on the reels.

Not only does the scatter reward payouts when it appears on the 3 Genie Wishes reels, but it also activates the Bonus feature. The Genie magically appears and offers up a choice among a treasure chest, an urn or a sack. Choose 1 among them to reveal one of the following;

- Free Spins with Raining Wilds - 10 free spins are awarded where a selection of wilds is randomly added to the reels on each free spin.

- Small Award - a payout equal to your total bet is awarded.

- Free Spins with Sticky Wilds – choose this and 6 free spins will be awarded. Wilds will be randomly added to the reels on every spin. Whenever a wild lands on the reels, it will freeze in position for the rest of the feature.

The 3 Genie Wishes reels appear different in both free spin rounds because the standard genie symbol is eliminated from the reels and so are the scatter symbols. The wilds that hit randomly end up being a great substitute. Sadly, it’s not possible to re-activate the feature for additional free spins in the 3 Genie Wishes slot.

Pragmatic Play is a slot games casino game provider that emerged in August 2015 and are the creators behind the 3 Genie Wishes slot game. They’re one of the fastest-growing companies in the online gambling scene because since then they have grown their team to over 150 employees who all work at the company’s main base of operations in Malta.

Another reason why the company has managed to grow so fast is the awards they’ve received so far. 2017 was their biggest year when they took home awards in the Software Rising Star category, Best Digital Company of the Year, Best Gamified Experience Company and Best HR Director of the Year.

More recently, Pragmatic Play has become one of the first casino game providers to have an operating license in the Bahamas and in Denmark. You can enjoy 3-reel slots and 5-reel slots like 3 Genie Wishes by Pragmatic Play, or try out some other top slots at SlotsUK: 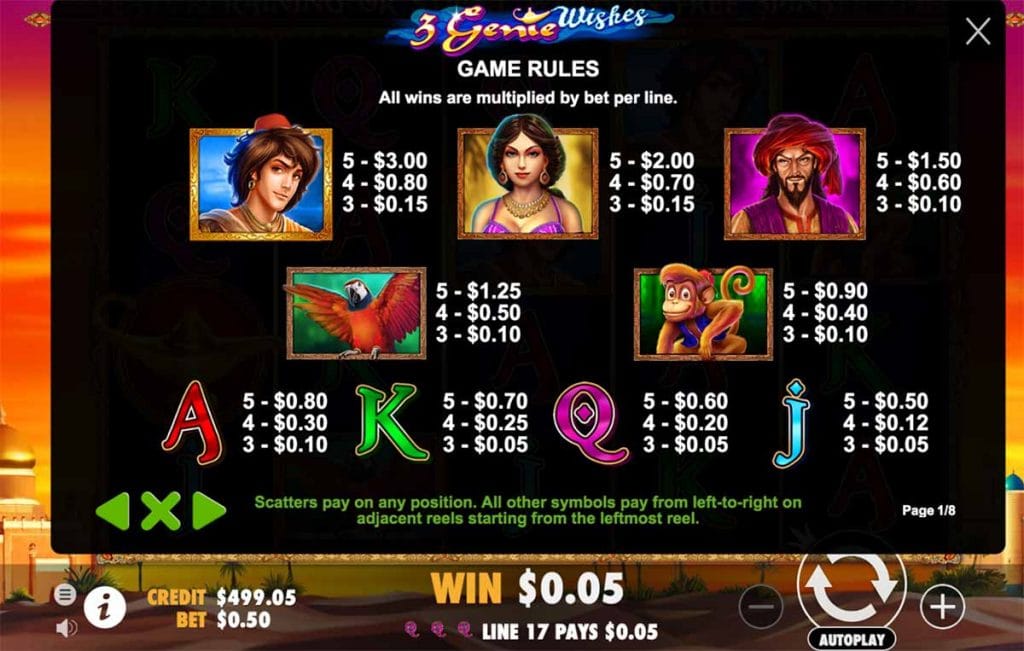 Verdict of the 3 Genie Wishes Slots

They’ve included a range of profitable features for your enjoyment. That fiery bonus feature will have you stacking up those coins right from the base 3 Genie Wishes slot game. When the feature is activated, a Genie appears on the screen and offers spinners 3 options.

Choose on one and you might win any of the following; Free Spins with Raining Wilds where 10 free spins are awarded during which a selection of wilds are added to the 3 Genie Wishes reels randomly, a small payout equal to the total bet awarded, a high payout of an instant cash reward of 10x to 500x your stake or Casino Free Spins with Sticky Wilds where wilds are randomly added to the reels on each spin.

If you’re lucky, the extra wilds will occur regularly and the 3 Genie Wishes genie could reward you a huge jackpot. All in all, you are definitely going to enjoy Pragmatic Play’s 3 Genie Wishes slot at medium variance. Check it out today at SlotsUK online casino.