Asgardian Stones by NetEnt is a 5 reel, 20 pay line with a Norse mythology theme available in this casino site UK. Features in the game include multipliers, free spins, Colossal Wild symbols, Avalanches, a Bonus Wheel, etc. The Avalanche feature in the game can lead to online slots games players winning several times from a single spin.

The 2x2 and 3x3 Colossal Symbols that appear on the reels can randomly trigger the Colossal Crush feature where rows of symbols are crushed in turn increasing the multiplier value by 1 bringing up to 4x. The Bonus Wheel feature awards winners cash prizes and a total of up to 25 free spins in the Asgardian Stones Free Spins feature.

Players land wins from Colossal Wild symbols which split into individual symbols. These are replaced in Avalanches and stick on the reels if they don’t end up forming part of a win. You can win up to 2,000x your stake on a single spin. Stakes in Asgardian Stones UK online slot can be placed on all Android and Apple devices start from 20p to £200 per spin.

How to Play Asgardian Stones Slot

Get ready to journey into powerful and magical Asgard, the home of the gods in the Norse themed Asgardian Stones slot. All your spins in the slot are backed by an epic soundtrack. Symbols on the reels include ancient runic card signs Q, A and K, as well as faces of old Gods shaped in stone.

The faces award the highest value of up to 25x your stake when 5 appear on a pay line. The Wild (W) in the game can replace all the other symbols on the reel except the Bonus Wheel symbol.

This slot uses the Avalanche feature that you see in other NetEnt slots such as Gonzo’s Quest. The Asgardian Stones slot symbols start falling into position on the reels and when a winning combination is formed, an Avalanche follows. The winning symbols explode then vanish from the reels before a second Avalanche of symbols falls. This means players can win several times from each spin.

The Asgardian Stones slots game also includes Colossal Symbols – there are Colossal versions of all symbols you see on the reels except the Wild. These are blocks of 2x2 or 3x3 symbols that help you form winning combinations easier. This leads to the randomly triggered Colossal Crush feature which can be activated in the main game and in the Free Spins feature.

When a new Colossal symbol comes into play, it ends up crushing the extra rows of symbols underneath to allow for bigger wins. For every row a symbol crushes, the multiplier ends uprising by 1 leading up to the highest valued multiplier of 4x in Asgardian Stones.

The Bonus Wheel can also be reactivated as many as 3 times with up to 25 free spins up for wins. Once the free spins start, the wild symbol can also transform into a Colossal Wild symbol. If the new symbol is used to form part of a winning combination, it splits into 1x1 wild symbols.

If you land on a win in Asgardian Stones, the symbols explode and then disappear before being replaced by new symbols. If a wild symbol doesn’t form part of a winning combination, it’s still okay because they’ll just stay on the reels until no more winning combinations are possible. 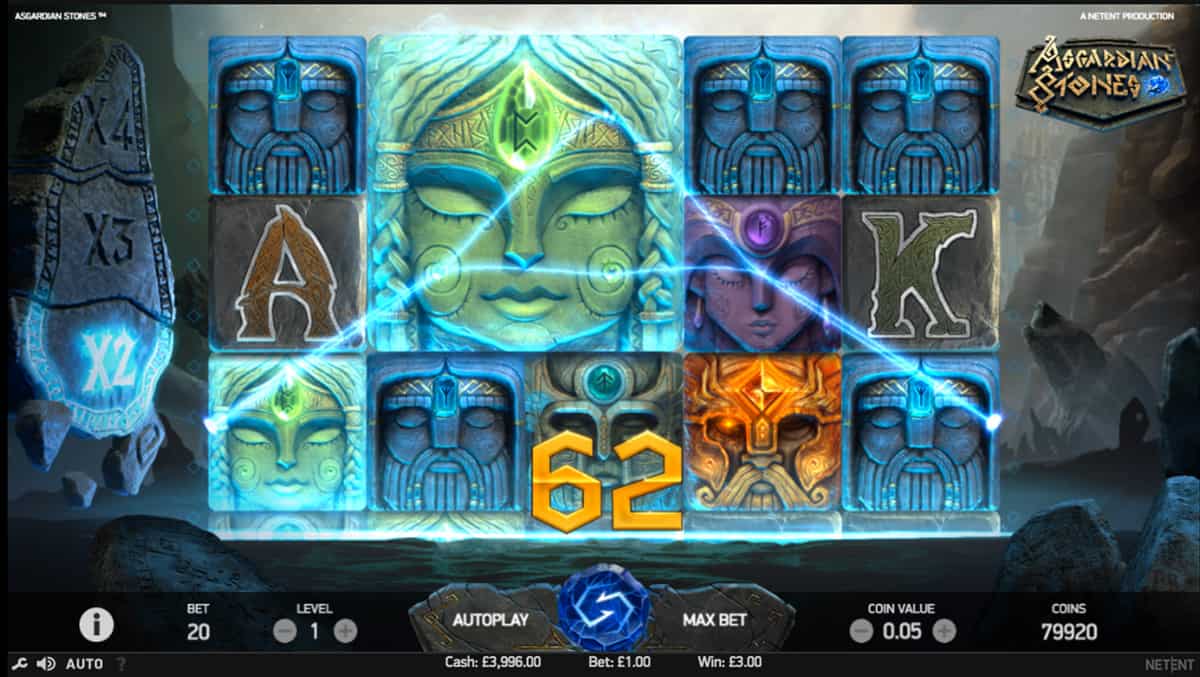 NetEnt is a Swedish online slot developer that started operating in 1996. The makers of the Asgardian Stones slot is known for creating games with superior design, slot promotions, flawless animations and high reward. They release an average of 2 new games every month, just to keep fans constantly busy and entertained.

This company also owns a progressive jackpot network that has rewarded winners tens of millions worth of prize money since it was started. If you like the sound of this developer, read our review of their exotic Aloha! Cluster Pays slot!

They’ve continued to grow from strength to strength, rising to become one of the most well-known online slot developers in the world. The Developer of Asgardian Stones has been cleared by independent third-party companies in Canada and Sweden. You can play 3 reel, 5 reel and multiple ways to win slots by NetEnt right here at Slots UK:

Verdict on the Asgardian Stones Slots

Asgardian Stones by NetEnt is one of the company’s best-looking slots in terms of design and amazing bonus features. The action is constant in both the main game and in the Bonus Wheel feature. The Bonus Wheel can also be retriggered to offer a total of up to 25 free spins. Once the free spins start, the wild can transform into a Colossal Wild symbol.

Players can win up to 2,000x your bet in both the main game and in the free spins. This makes it a highly lucrative slot. The only thing you need to do next decides whether you are ready to enter Asgard. If you enjoy Norse themed slots, you will enjoy NetEnt’s Asgardian Stones slots.