Rainbow Riches is a 5 reel 20 payline Barcrest slot game with an Irish theme.

Rainbow Riches online slot is extremely popular in casinos, pubs and arcades in the UK as one of the most well known slots uk. Lots of leprechauns, rainbows and pots of gold feature in this game. The game includes the Road to Riches Bonus feature that is activated when 3 or more Bonus Leprechaun symbols appear on the reels.

A spin of the wheel will determine how many steps up the cash path you go. There’s also the Pick Me feature where you stand to win up to 500x your bet and you also stand to win multiplier values in the Pots of Gold Bonus feature. You can enjoy the game on any of your Android and Apple mobile, desktop and tablet devices for stakes starting from 20p to £500 a spin.

About the Rainbow Riches Online Slot

Barcrest’s Rainbow Riches is a favourite among UK players, and becomes even better with the use of casino promotions. The slot continues to grow popular everyday despite its 2009 release. It’s got a simple set of graphics and animations including a purple background with a rainbow running across it. Symbols on the reels include card values Q, A, K, J and 10, the Rainbow Riches logo, a pot of gold with a rainbow in the back, a gold coin and a leprechaun. The Rainbow Riches logo awards payouts of 0.1x, 2.5x, 7.5x or 12.5x your bet when 2, 3, 4 or 5 land in combination. The gold coin wild symbol can replace all the other symbols on the reels except the 3 scatter symbols. It rewards the highest payouts of 0.1x, 3x, 10x or 25x your total bet when 2, 3, 4 or 5 appear on a payline. Rainbow Riches comes with 3 bonus features; 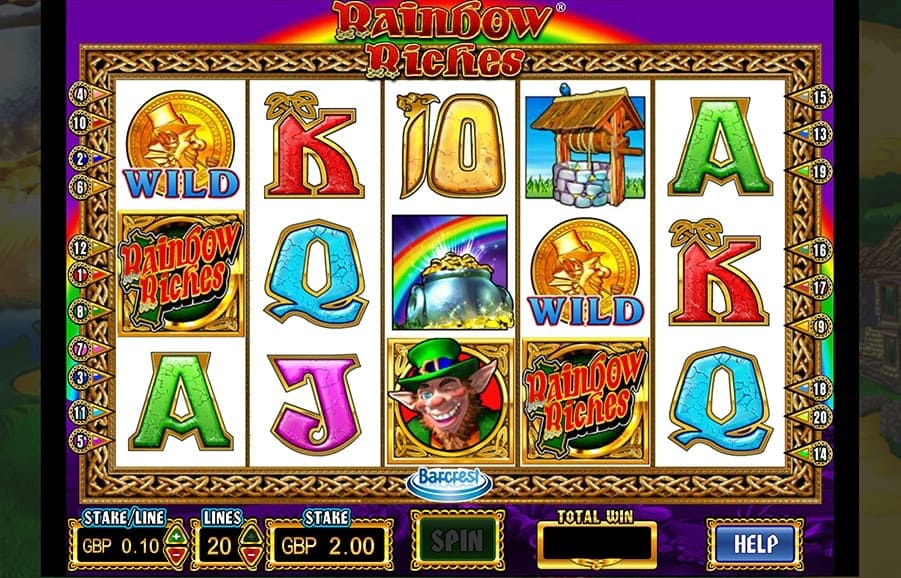 About Barcrest the Developer of Rainbow Riches Online

Barcrest is a UK slots games manufacturer with a long history dating all the way back to 1968. The company used to dominate the land based casino gaming industry in all British pubs. This was mostly in the 70s to 90s before the internet became the new go-to for slot gaming. Barcrest was later acquired by IGT in 1998, then later sold to Scientific Games in 2011. Barcrest as a brand is still going strong, with some of their latest titles being excellent comparable to some of the latest slots by newer software houses.

Scientific Games bought Barcrest for $50 million. Barcrest has the strongest presence in the UK. When Barcrest was formed in 1968, they were mostly a dominant player in slot and skill gaming like quizzes and puzzle games. The first online slots by Barcrest started to appear in the early 2000’s, shortly after IGT bought the company in 1998. Some of the casino slot games released by Barcrest include;

You can find all these and more 3 reel, 5 reel and multiple ways to win slots part of the Barcrest collection. 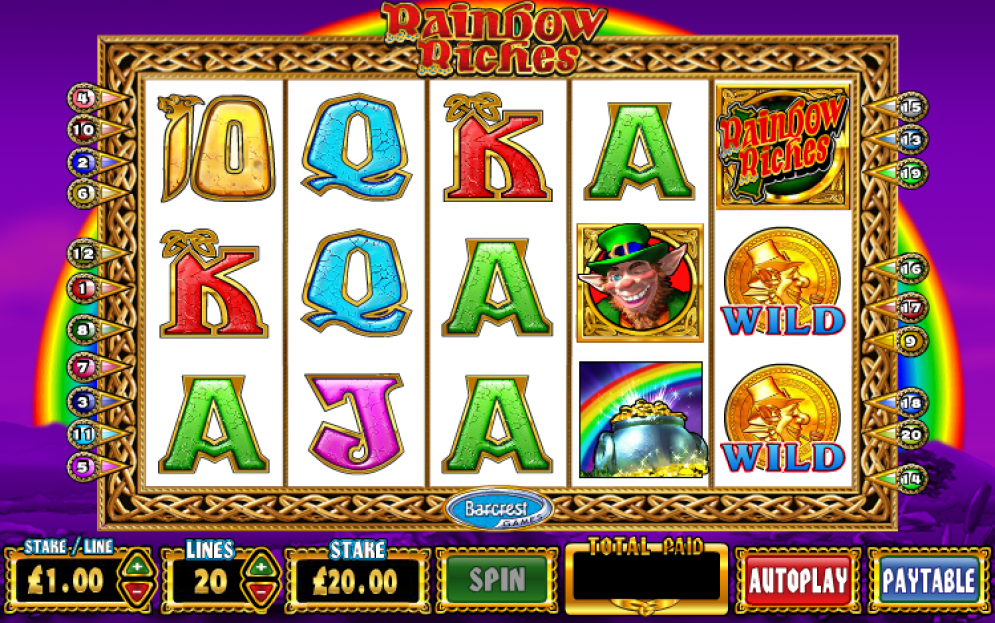 Rainbow Riches by Barcrest is an exciting slot game with plenty of fun and rewarding bonuses on deck. It’s a cult favourite among millions of players. That’s why there are so many versions of Rainbow Riches slots out there including Rainbow Riches Drops of Gold, Rainbow Riches MegaWays, etc. In this version of Rainbow Riches, the Return to Player percentage is 95% and the game has a medium variance. The highest payouts possible in the slot go up to 500x your stake in all of the bonus features as seen above. In addition, you receive that same payout when you fill all the 5 reels with wilds.

Rainbow Riches is as popular today as when it was first released, kind of like another old classic, Mermaids Millions Slot. If you want to enjoy more Irish themed action, you can give Rainbow Riches Megaways a try. It is as iconic and higher volatile as its parent slot Rainbow Riches.