Rainbow Riches is one of the iconic slot brands that we have come across. The game started as a fruit machine and later transitioned into an online game. The yellow and green logo and the cheeky leprechaun have become the most recognizable graphics across most casinos.  The regular online slots game is available in 30 plus formats, most of which feature the Road to Rich and Wishing Well bonus rounds. The game is known for its numerous features that include free spins round and the big win potential.

There is now a Megaways slots version of the slot by Barcrest. The game uses all Megaways features including the multipliers and cascading wins. We can now look forward to a better release from the long parade of Megaways in the industry.

About the Slot Provider - Barcrest

Barcrest is a familiar name to anyone who loves online games. The company started off as a primary provider of fruit machines across the globe. In the recent past, it has undergone some important transitions allowing both new and old gamers to experience fun-filled excitement if Barcrest games.

Through the advancement in technology, the company has been able to avail most of its games for mobile play. This is after it became a subsidiary of Scientific Gaming. You can now access most of their games across multiple online casinos.

Other top games by Barcrest include the following: 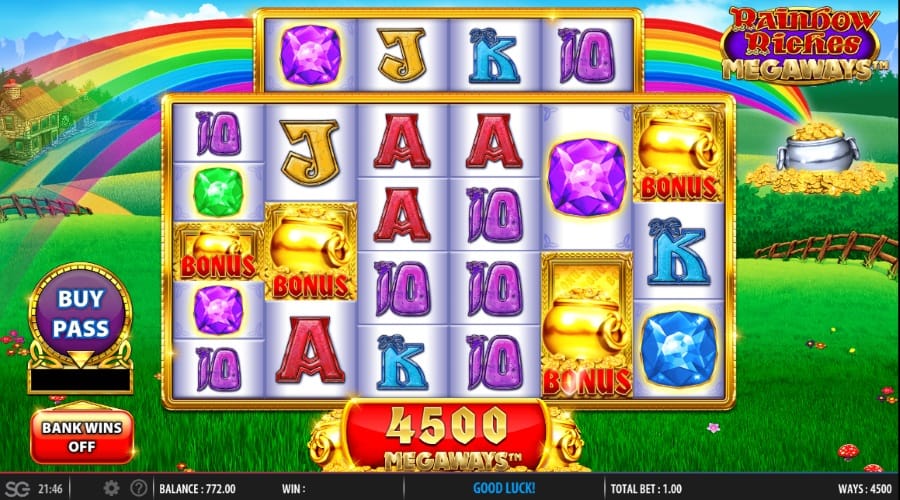 How to Play Rainbow Riches Megaways

If you are intrigued by the various versions of Rainbow Riches, then you will be happy to note that Barcrest has not changed the graphics of this game in any way. All aspects of the game—look, sound, and feel have been maintained.  The game has an Irish theme, and the reels are covered in gold combined with a striking lush green countryside backdrop.

Below the games’ logo, a rainbow shoots out of a pot of gold filled with gold coins. Symbols on the reels include the standard A to 10 royals as well as the orange, purple, and, green gems. The diamond is the most lucrative symbol with 6 matching symbols giving you 50x your bet. There is also a wild symbol that is represented by a horseshoe. 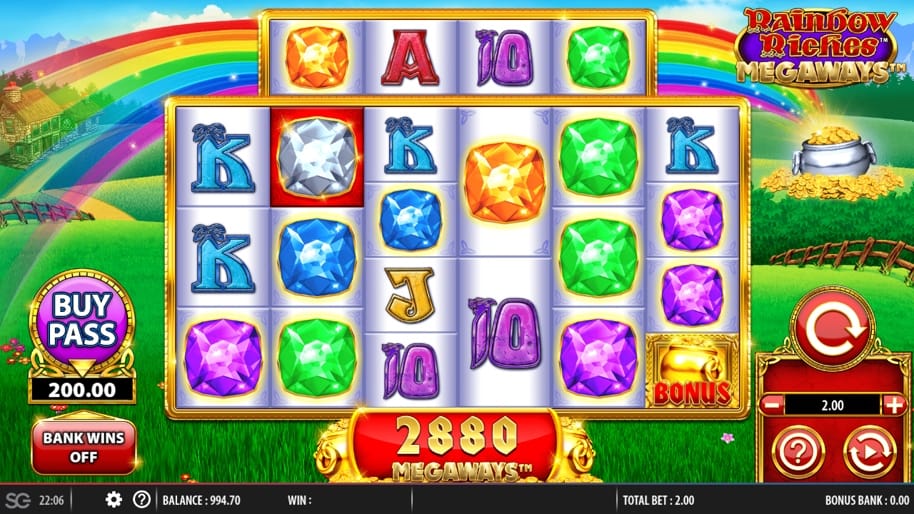 The game features Cascading Reels mechanics. In this feature, all symbols forming part of the winning combo explode making room for new symbols. The process repeats until no more winning combinations appear in view.

The game’s wild symbol is in the form of a horseshoe. It substitutes for all standard symbols bar the Super Gem, Bonus or +1, +2, and, +3.

There is a Super Gem slot games Bonus feature. This is triggered when the Super Gem appears on the horizontal reel. When this happens, all high-value gem symbols in view are changed into one matching randomly selected gemstone.

The Free Spins feature is the key to landing substantial wins. It comes into play when four or more scatters land anywhere on the main reels. This rewards you 12 free spins. For each additional scatter that lands, you are given 5 extra free spins. At the top of the reels, you get +1, +2, and +3 symbols.  The feature also comes with an unlimited Win Multiplier, in which all winning cascade increases the multiplier by 1x with no max limit.

The Buy Pass feature allows you to buy into the free spins feature if you are impatient to wait for it. The feature goes for 100x your wager and gives you direct access to the free spins. If you are feeling more adventurous, you could opt for the Take a Chance option instead. If the arrow lands on the green part of the circle, your odds of activating the feature depends on your wager for a cost of, 25x, 50x, and 75x your bet. You get a 25%, 50%, or 75% chance of triggering the bonus respectively. 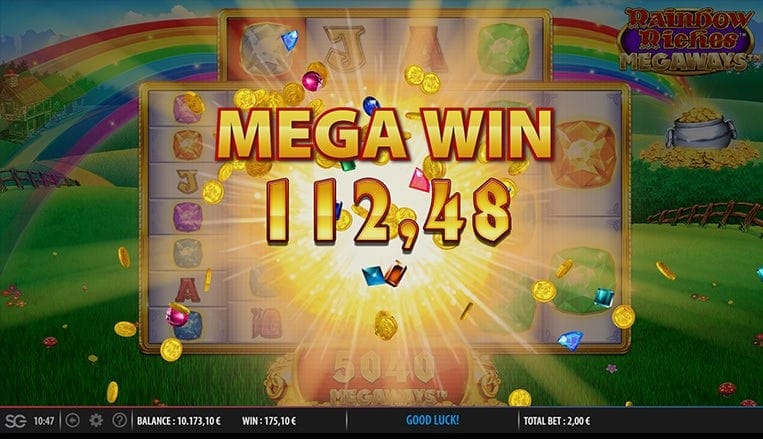 Rainbow Riches Megaways can be played across all devices starting from 20p to $20 per spin.

The game has progressive jackpot but as mentioned earlier, there is an unlimited progressive multiplier in the free spins feature. When it comes to the game symbols payouts, the diamond is the highest paying. The card suites make up for the lower paying symbols and you need to match between 3 and 6 matching symbols on an active payline. The paytable is as follows:

With several Megaways games being introduced in the market today, it is inevitable that there will be some flops out there. However, we can say that Rainbow Riches (Barcrest) is not one of them. Such an iconic brand is always going to make a great match for the new game engine.

While it has nothing different from other Bonanza games, it has a charm that sets it apart with. The thrill of potentially landing a win in the free spins wound will be hard to beat. If you don't fancy this slot, try the classic Rainbow Riches here.