Wolf Gold by Pragmatic Play is a 5 reel and 25 payline Native American themed slots uk. Features in the game include free spins, re-spins, a jackpot, etc. In the Free Spins feature, players receive endless free spins and also benefit from giant symbols occupying the 3 reels in the middle. There are 3 progressive jackpots available.

In the Money Re-spin feature, players collect moon symbols that appear on all 15 positions on the grid in the hopes of triggering one of the jackpots, the Mega Jackpot. Stakes in the Wolf Gold slot games online start from 25p to 125 pound a spin on all iOS and Android smartphone, tablet and PC devices.

How to Play Wolf Gold Slot

Spinners will get to head to Native American territory in Wolf Gold by Pragmatic Play. The slot design looks and gives off the vibe of a live casino slot. The action here is set against a desert canyon background with symbols on the reels including card values J, A, K and Q, stallions, a moon, big cats, bald eagles and a buffalo.

The stallions reward players up to 8x your bet, the big cats reward up to 12x your bet and the bald eagles reward up to 16x your bet. The buffalo symbol rewards 1x, 10x or 20x your bet for 3, 4 or 5 on a reel. The Wolf Gold slots also includes a wild symbol that is represented by the desert fox symbol. The wild can land anywhere on the reels and replaces all other symbols except the rock formation scatter symbol and the moon symbol.

The amazing Wolf Gold slots comes with two amazing bonus features that you are going to love:

For a company that was launched in 2015, it would be an understatement to say that Pragmatic Play has come a long way and are the makers of the Wolf Gold slot. Unbeknownst to us all, they had managed to grow their workforce to over 150 employees by end of 2017. They have one base of operation located in Malta, the same place all their employees handle day to day company matters.

The company had already started earing recognition in gambling circles by 2017. That's how they ended up being nominated for the Best HR Director of the Year, Best Digital Company of the Year and Best Gamified Experience Company all in the same year, and they won.

More award nomination came knocking for Game of the Year twice- once in 2016 for Hot Safari and then in 2017 for Queen of Gold. Unfortunately, they missed out both times. However, that was enough proof that the company could create award winning slots like the Wolf Gold slot game. For more slots to try from Pragmatic Play at Slots UK check out the following;

Play the above and many more games with our slot promotions today on Slots UK! 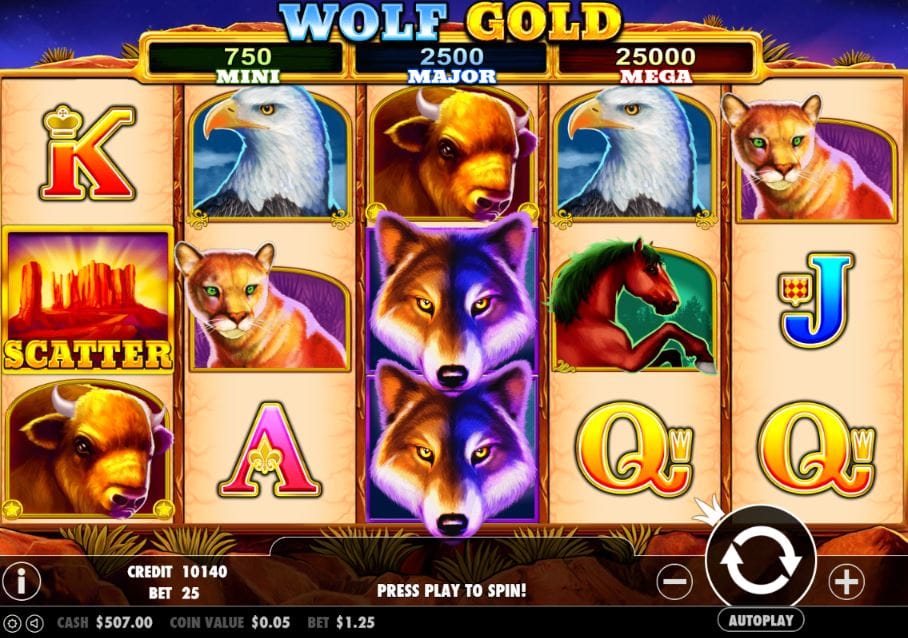 Why you should play Wolf Gold Online

Wolf Gold by Pragmatic Play promises to be an enjoyable slot for both beginners and professional slot players. The slot has a simple set of visuals with a fun soundtrack to complement the adventure theme. The unique animations like the howling wolves that come on every time you spin are nice little touches that usually add on to a players' experience.

You'll also enjoy some simple gameplay throughout the slot as well as rewarding bonus features such as the Free Spins feature and the Money Re-spins feature. Players win 6 free spins to start with more coming in every time you land scatter symbols on the reels. And guess what? There is no limit on the amount of times you can trigger the Free Spins feature.

The wins can be big especially when the giant symbols start appearing on the 2nd, 3rd and 4th reels. The Money Re-spins feature, on the other hand, is activated when 6 moon symbols appear on the reels.

All the regular standard symbols are removed from the Wolf Gold reels and just the moon symbols will remain. The symbols that remain on the reels come complete with a coin value and 3 re-spins are rewarded. If more moon symbols appear, they get added to the cluster and the amount of re-spins you had resets to 3.

The free spins can be a hit and miss affair, where sometimes you end up with loads of wins while other times you'd need to try a little harder. Either way one thing's for sure you're going to have a memorable time playing Wolf Gold slot by Pragmatic Play. Give it a go to see what you're missing out on. If you enjoyed this game why not also check out Shamans Dream slot?