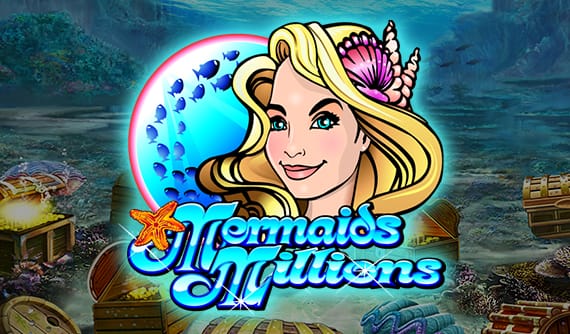 The Mermaid Millions slot machine is one of the oldest slots that Microgaming has ever released and undoubtedly popular because of its simple and straightforward gameplay. The graphics in the game seem a little dated, but a few spins in this slot and you will understand why it is a cult classic among Microgaming fans. And if you are looking for the online slots UK, look no further than Slots UK!

Mermaids Millions comes with 2 exciting bonus feature rounds, starting off with the Free Spins feature where you will be allocated 10 free spins. Any successful wins during the feature will have a 3x multiplier applied to them. There are also cash prizes up for wins during the Treasure Bonus feature. More lies ahead in this popular Microgaming slot so start your stakes on all your favourite Android and Apple devices.

About the Mermaid Millions Casino Game

The action in Mermaids Millions is set underwater- below sea level in a bright blue background. The graphics are simple and well done, and you can reach a new level of entertainment if you take advantage of promo codes. If you love all things sparkly, then you will enjoy this Microgaming slot action. Symbols on the reels include playing card symbols decorated with fishy objects, whimsical creatures composed of half human and half fish, treasure chests, mermaids, seahorses, pearl-bearing oysters, King Neptune and high value card symbols (like the ones you’d see in video poker machines) wrapped in sea creatures and objects that match the theme.

The Treasure Bonus- the special Treasure Bonus feature in this Microgaming slot is activated when 3 Treasure Chests appear on an active payline. The number of Chests that activated the bonus ends up determining the number of picks you are offered when you land at the bottom of the sea.

Once you land at the seabed, a series of shells appear on screen. You will be instructed to pick any 3 to 5 shells, depending on the number of Chests that started up the bonus round. These shells usually contain cash rewards that can be added to your payline wins once the bonus game ends. This bonus round can also be triggered during the Free Spins feature.

The bet limits in this slot cater to both high rollers and low rollers. The highest bet you can make is at 3.75 credits when all 15 paylines are wagered. 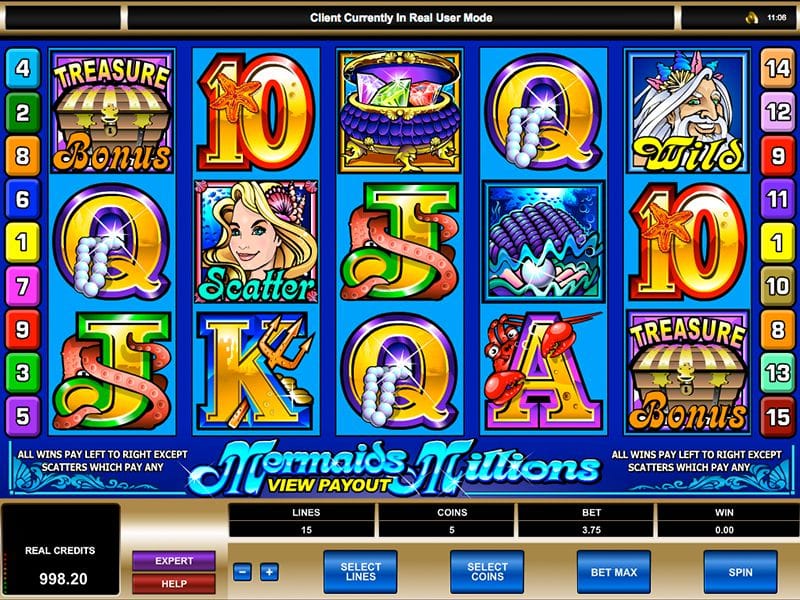 About Microgaming the Developer of the Mermaid Millions Slot Machine

Microgaming is a highly respected online casino software provider whose success started in 1994. They launched their first online casino called the Gaming Club in 1994 and it still uses the same Microgaming software today. The company went ahead to release their Viper software in 2002, which grew the company even further as it was proof that they could develop highly efficient gaming solutions and slots games. Microgaming has also paid the highest progressive jackpot wins in the last decade sitting at over $100 million. The company also tends to pay winners in a single and full payment, unlike other online casinos that usually pay winners in single payments over a long period of time.

Microgaming also has a wide range of casino games including card games, slot games, instant win games, etc. Some of the table games on offer include; blackjack, sic bo, baccarat, etc. The company has released more than 300 highly graphical and rewarding huge online casino slots. Microgaming slots are playable in over 120 online casinos where 40 highly successful poker rooms use their software. This is one of the reasons that allows the company to offer huge progressive jackpots in the gambling industry.

Some of the most popular slots offered by Microgaming include Major Millions, Lotsaloot and Mega Moolah. Their biggest jackpot ever offered is in the Mega Moolah slot. They also offer movie themed slots like Batman, Tomb Raider, Lord of the Rings and Hitman. Microgaming has a lot of older slots like Agent Jane Blonde and Thunderstruck which are already showing their age, which makes it difficult to compete with visually entertaining slots like those from NetEnt. 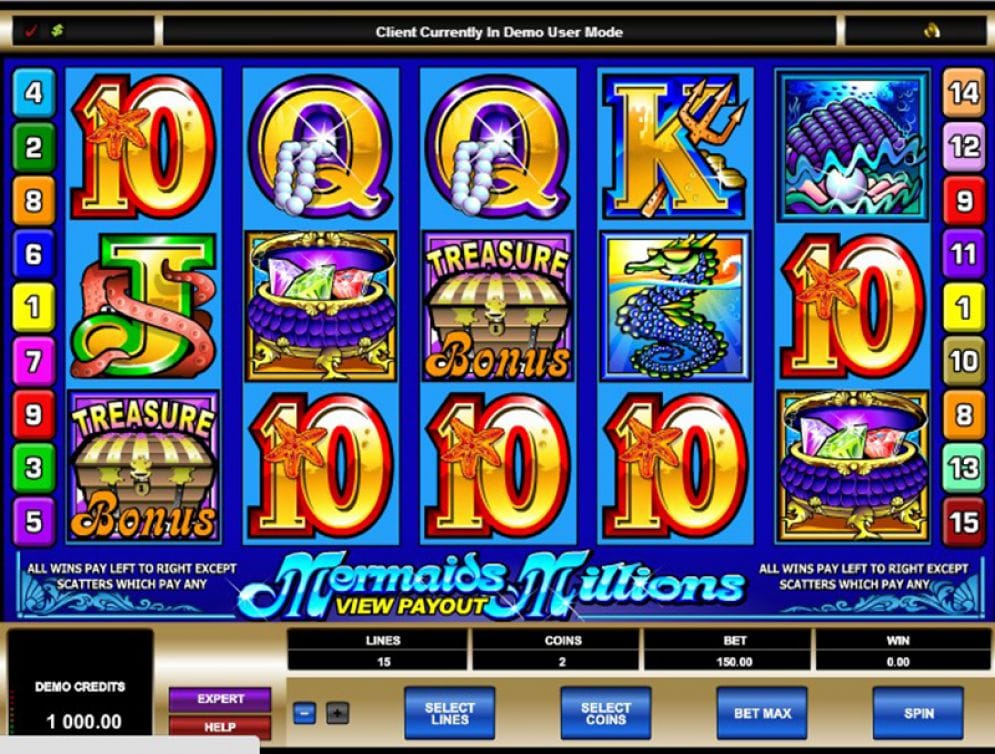 The Verdict on Mermaid Millions Online

Mermaids Millions by Microgaming is a simple, exciting underwater themed slot that is going to be an enjoyable game for any beginner slot players and professionals as well. The game doesn’t include some of the high-quality graphics and modern technology you’re used to, but that’s just because it is from a different time. The fact that it is one of Microgaming’s most played slot machine games accounts for something.

Other players see something special in Mermaids Millions by Microgaming and chances are that you will too. The Free Spins feature in the game offers players 10 free spins where any successful win will have a 3x multiplier applied. The highlight though is definitely the Treasure Bonus feature where you are offered a number of picks that end up revealing cash prizes. Luckily, the bonus round can be activated within the free spins feature for extra wins.

Don’t go in expecting any Avalon, Village People Macho Moves slot, or Tomb Raider looking slot. Instead, you will enjoy a heavy dose of mermaid action. It takes a while to hit the bonus round, so keep an eye on your bank roll.