Big Kahuna II: Snakes and Ladders by Microgaming is a sequel to the original Big Kahuna slot, released way back in 2003 and it is now available on this slots site UK. It offers players five reels and fifteen paylines which is more than what we got in the first one.

Big Kahuna II is every bit as enjoyable as its predecessor despite a lot of people saying that sequels don’t live up to the hype. This game has a Pacific Island-themed game and the backdrop to the reels is a mountain range vista.

A range of fruit including, kiwi fruit, pineapples and oranges make up the lower value symbols while the high value ones are a monkey, a lizard, the main male and female characters, and a tribal mask.

Players can wager up to 20 coins per pay-line, though as with any new on-line slots game, it’s advisable to play a few dummy hands while growing accustomed to the volatility.

About Microgaming - Pioneers Behind Big Kahuna Snakes and Ladders Slot

Microgaming is one of the oldest and most recognized suppliers of online casino software based on the Isle of Man whose success can be traced back to 1994. Since then, the award-winning technology company has expanded into different areas of online gaming.

Micro gaming’s slots are available in more than 120 online casinos including Slots UK the home of online slots UK. If you would like to enjoy the new spin to win slot games, then you need to check them out on Microgaming. 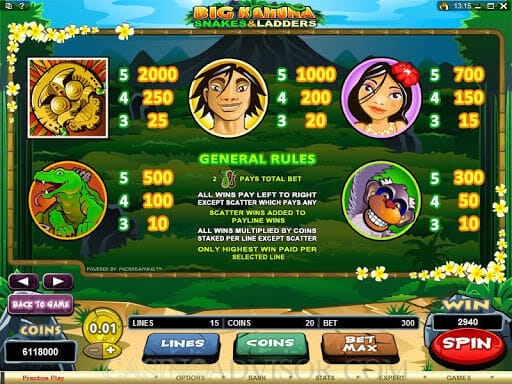 Big Kahuna: Snakes & Ladders by Microgaming is the latest addition to the roster of UK slots you can play on the Slots UK casino site. The theme and design on offer is similar to the sequel. The Big Kahuna logo is wild and doubles the wins to which it contributes in the base game and multiplies them by four in the free spins.

The bonus symbol is the genetically combined snake/ladder creature. The Big Kahuna icon is the wild in the game, and therefore substitutes for all symbols except for the snake and ladder scatter. The wild also acts as a multiplier for all base game wins. The only exception to this is when you hit five Big Kahunas in succession.

Just like in most slot games, five wilds is pay dirt and when you land this combination you can win between 5,000 and 100,000 credits, depending on your bet-per-line.

Lesser pay-outs include 2,000 coins for five elusive masks, 1,000 coins pays out for five jungle boys, while 700 coins represents the remuneration for a combination of five jungle girls. All in all, there are more than 30 winning combinations one can aim for. 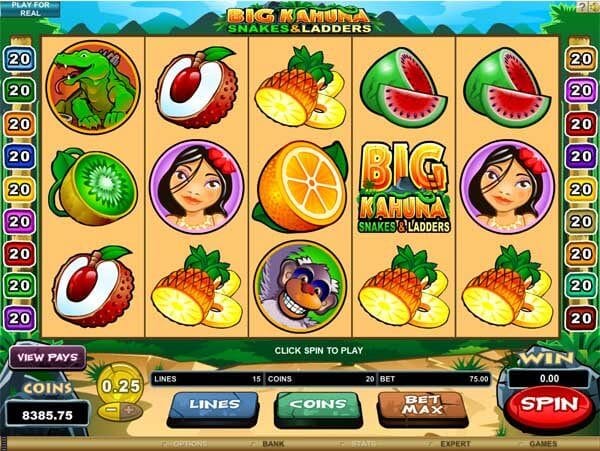 A game would feel incomplete without the bonus features and Big Kahuna: Snakes & Ladders which is on Slots UK does not disappoint and the fact that it has some UK slots available is exciting. Some of these features include:

One thing that is evident is that Big Kahuna: Snakes & Ladders by Microgaming is a considerable improvement on its predecessor. You can check it out on Slots UK, you’ll also find other Microgaming online slots UK on offer and experience more fun and exciting games.

With an RTP of 96.16%, the addition of an extra bonus round is most welcome and the gaudy colours and cartoonised symbols put a smile on even the most inexpressive poker face. You’ll probably appreciate the effort that has gone into this pleasant video slot whether playing for free or for $75 a spin.

If you're looking for some of the best slots available, play Big Kahuna Slot today.