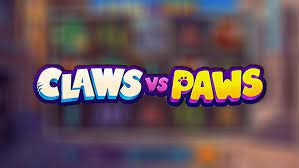 Claws vs Paws is a video slot with 5 reels and 20 pay-lines, one of the new UK slots powered by Playson software provider on Slots UK. This fun cartoon adventure has got excellent win potential as well as a range of highly rewarding online slot UK bonuses.

Some of the bonus features you will play include; reel re-spins, 3 different free spins features, and more yummy treats from all the kitties. There’s lots of detail to each symbol, and some clever design touches, such as a background image of a city street where the columns of a bank look like bones and of course the developers couldn’t let us miss out on the cat-shaped door.

The gameplay is accompanied by a jazzy soundtrack that fits in perfectly with the theme and the return to the player is 96.86%.

About Playson - The Developers of Claws vs Paws Slot

Playson is a leading slots game developer based in Malta with a growing portfolio that includes some well-known slot machines. They provide a first-class solution for a wide range of highly-respected iGaming operators such as Slots UK where you can play a variety of games on the available UK slots.

Having built a great portfolio, you should check out their games on Slots UK and enjoy some of the online slot games that are on offer.

Playing Claws Vs Paws - What to Expect

Claws vs Paws by Playson is now on the Slots UK site, the home of new UK slots. It can be played on all devices from 20p to £100 per spin and has some benefits from hacked wild wins, only-win spins, and spins with only the top value symbols on the reels.

Visually, it’s based on a cat and dog. The cat is a hacker whilst the dog is a watch dog that guards the bank then the cat tries to steal from the bank. It does have a classic Cops vs Robbers feel. Symbols on the reels include card values Q, J, A, K, and 10, police hats, sets of keys, dog bones encrusted in diamonds and the Claws vs Paws game logo.

The game logo awards the highest value in the game of 25x your stake for 5 on a payline. The wild symbol in the game is represented by the diamond symbol. It can replaces all other symbols on the reels except the scatters – 5 on a payline will award you 30x your stake. 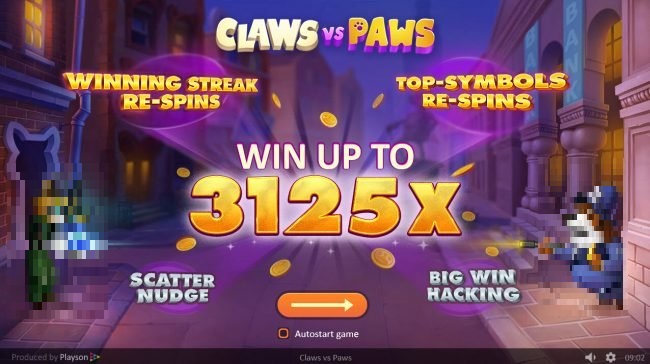 Bonus Features in Claws vs Paws

It is always great when a game has bonus features and Claws vs Paws which is one of the UK slots available on Slots UK is a few of those. The slot bonuses you get to enjoy include;

Our Verdict on Claws Vs Paws Online Slot

The Claws vs Paws online slot UK casino game is exceptional and you can play it now on Slots UK. It’s packed with clever design touches as well as an outstanding collection of bonus features and that’s fully mobile-optimized to appeal to the widest possible audience.

If you don't think this is the right game for you, why not try Clover Tales Slot instead.