Take control of John Hunter, an avid adventurer on the hunt for Da Vinci’s Treasure. Spin the five reels and see how many of the game's twenty-five pay lines you can line up. It won’t be easy as this is a high variance slot game available to play at this slot site UK.

Play Da Vinci’s Treasure by betting between 25p and £50 per spin. This slots online in the UK game has an RTP rate of 96.53% with a max win of 480,000x the player’s stake. Do you think you are capable of uncovering the secrets of the renaissance era painter?

Check out Da Vinci’s Treasure from developer Pragmatic Play, along with the best slot games at Slots UK.

Playing Da Vinci’s Treasure is much easier than trying to decipher the ancient puzzles that surround the man. Look to the display bar at the bottom of the screen and use this process to get going.

Winning pay lines form from left to right and must contain three or more matching symbols. The Da Vinci’s Treasure slot game has a real Indiana Jones vibe. This theme means that the symbols are comprised of ancient tomes, mystery bags, and arrows. John Hunter is the main character and will pay out the most at 32x the player’s stake for five across a pay line. 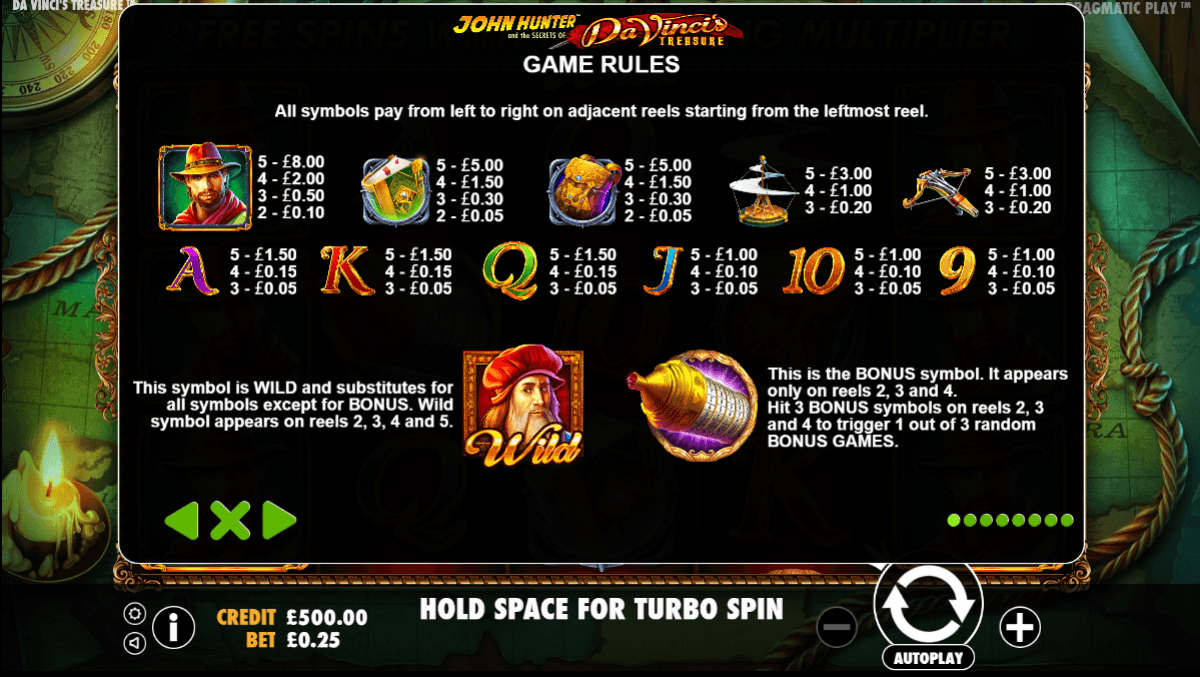 What to Expect in this Slot

The stats in Da Vinci’s Treasure do not stray into wild territory. Things are kept relatively safe in this slot game.

The RTP rate is 96.53%, meaning that the casino will have a house edge of 3.47%. A games RTP determines the amount of the player’s overall deposit that will be returned when they play the game. For example, a player that deposits £100 will receive back £96.53, on average.

The most surprising aspect of this slot game is the max win of 480,000x the player’s stake. Don’t expect to see this amount when you play Da Vinci’s Treasure, however. The variance is high, which means that players will most likely encounter high-paying lines, but not very often.

The table below features more stats on the Da Vinci’s Treasure slot game.

The only symbol we are yet to mention is the scatter symbol. This looks like a coded wheel and is suitably the ticket to unlocking the Da Vinci’s Treasure bonus features. Land three scatters on a spin to trigger a random feature. There are three bonuses to participate in, each one different from the last. These include: 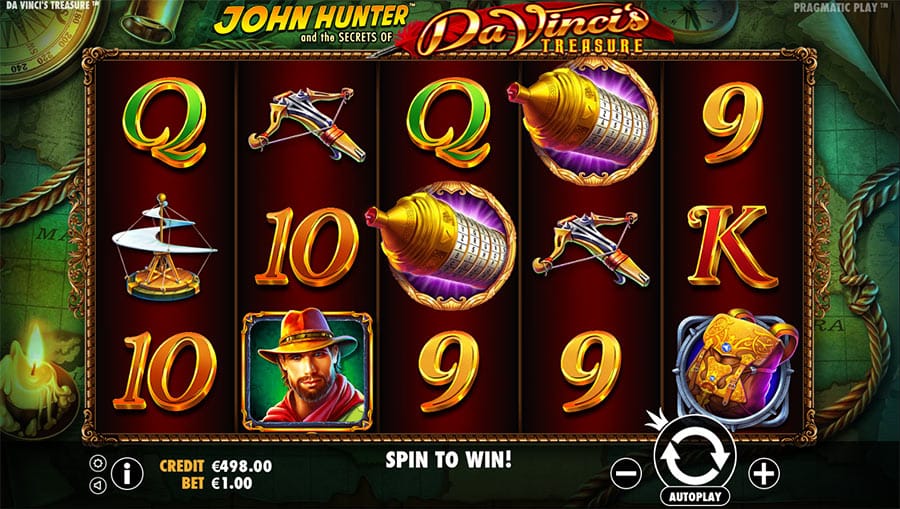 Slots UK is a great casino site, full of hundreds of slot titles. One such slot title just so happens to include Da Vinci’s Treasure. When you sign up to play Da Vinci’s Treasure at Slots UK, you will also be able to take part in our welcome offer when you make a first deposit of £10 or more. Spin the Mega Reel to try and win up to 500 free spins on Starburst (Full Ts and Cs Apply).

If this sounds like a good offer, or you just want to play Da Vinci’s Treasure, register an account with Slots UK by:

It really is that easy to sign up for the site. When registered, find the Da Vinci’s Treasure slot on our list or return to this page and click ‘Play Now’.

Who developed this Slot?

A deep crimson welcomes players that open up the Da Vinci’s Treasure slot game. Everything is designed to look ancient and decrepit, including the game’s symbols. The graphics are animated, but that doesn’t stop John Hunter from looking like a rugged hero. Each sound oozes tension as players creep closer to that forbidden treasure.

Pragmatic Play is the mind behind this slot adventure. They have existed for years and created a variety of different slots. Whether you are looking for slots with high stakes or a certain theme, Pragmatic Play has got you covered. Try one of their other slots, or titles similar to this one such as:

Da Vinci’s Treasure is a fun slot game that focuses most of its attention on giving players a story, rather than being overly flashy. Don’t get me wrong, the overall max win is huge, but the game is good enough that players can enjoy it without the larger wins.

Da Vinci’s Treasure is an enjoyable slot, well worth a try. Sign up now to see if you can unravel the mystery of Da Vinci. While you’re here, don’t forget to also check out the Da Vinci Diamonds slot here at Slots UK.

*All values (Bet Levels, Maximum Wins, etc.) mentioned in relation to this slot game are subject to change at any time.