Da Vinci Diamonds by IGT is a 5 reel, 20 payline online slot that uses the Tumbling Reels mechanism. The story is based on the Renaissance period, a time when an air of elegance and beauty spread across the world. Famous paintings such as Da Vinci’s Mona Lisa emerged from the Renaissance period. Some of the features in this slot include the free spins feature, which is the main feature in the game. You will receive up to 300 free spins. The feature starts with 6 free spins and extra bonus symbols are added to the reels for even more free spins. This slot uses the Tumbling Reels mechanism where you can win consecutive times on the reels. Stakes in the game start from 20p to £200 per spin. 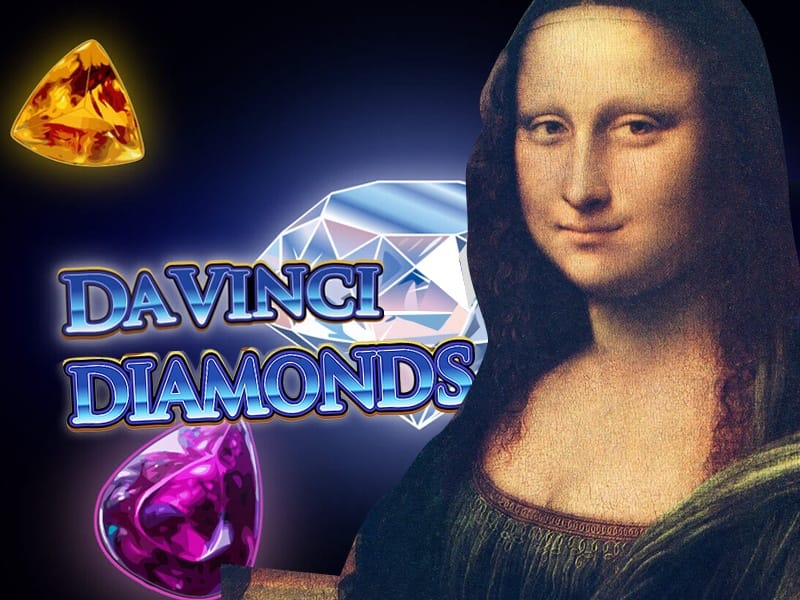 Da Vinci Diamonds one the most played slots in the world both online and offline. This says a lot considering the game was released years ago, yet still remains popular among punters today. The slot tells the story of the Renaissance period where an air of elegance and beauty returned to Europe after the black plague had left it almost desolate. The Renaissance period refers to a time when creativity blossomed. Some of the most famous paintings in the world emerged during this time. They include Leonardo Da Vinci’s Mona Lisa painting, which is the subject of this slot.

Symbols on the reels include card values gemstones of various colours, 3 of Leonardo Da Vinci’s paintings including the Mona Lisa and The Da Vinci Diamonds logo symbol which is also the highest rewarding symbol. When 3, 4 or 5 appear on a payline, players will receive 5x, 25x or 250x your stake.

The highest number of free spins you can win in Da Vinci Diamonds is up to 300 free spins. You’ll probably not get all 300 of them, but you’ll get a pretty high number. Anywhere past 50 free spins will be enough to recover the money spent in the slot. Some players have even made it to 80 free spins.

International Game Technology (IGT) began operating in 1975 thanks to founder William. S. Redd. IGT is headquartered in Las Vegas, America’s gambling hub. IGT started off as a small private company in the 50s before the company underwent their growth spurt in 1981 when they went public. With their IPO now on NASDAQ, IGT made the announcement that they were going ahead with supplying their services and products at a global scale. Find new casino promotions at Slots UK.

IGT officially made their entry into the gambling world in 1984 when they acquired Electronic Data Technologies. IGT went on to introduce quite a few casino gaming concepts like S-Slot which was their way of entering the reel slots market. IGT went on to introduce a number of new casino products like their Megabucks Slot machines and Player's Edge video poker machines. Both of these became extremely popular because they gave players a chance to win $1 million jackpots.

In 1989, IGT decided to introduce theme-based slots, a contrast to the classic 3 reel slots everyone offered. Theirs were mainly based on Double Diamonds. In 1991, IGT got a listing on the New York Stock Exchange and established a Europe office that provides services to clients all over continental Europe. IGT has been fully licensed and their games have been thoroughly tested and certified for randomness and fairness. 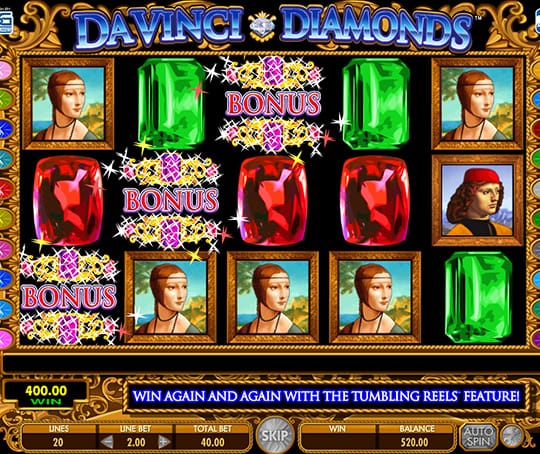 The Verdict on the Da Vinci Diamonds Slot UK

The best thing about the free spins bonus round is that the Tumbling Reels mechanism is still active meaning you can keep winning consecutive times from the free spins feature. This slot has got a medium variance with wins going up to 5,000x your bet on every spin and/or free spin when you fill the reels with Da Vinci Diamonds logo symbols.

Da Vinci Diamonds is a true classic, one you will enjoy after a few spins on the reels. The Free Spins Bonus feature can be triggered frequently and the wins will be worth the wait. If you are yet to play Da Vinci Diamonds, you’re missing out on what could easily become one of your favourite online slots. Go ahead and give this slot spin to find out why other players keep coming back.