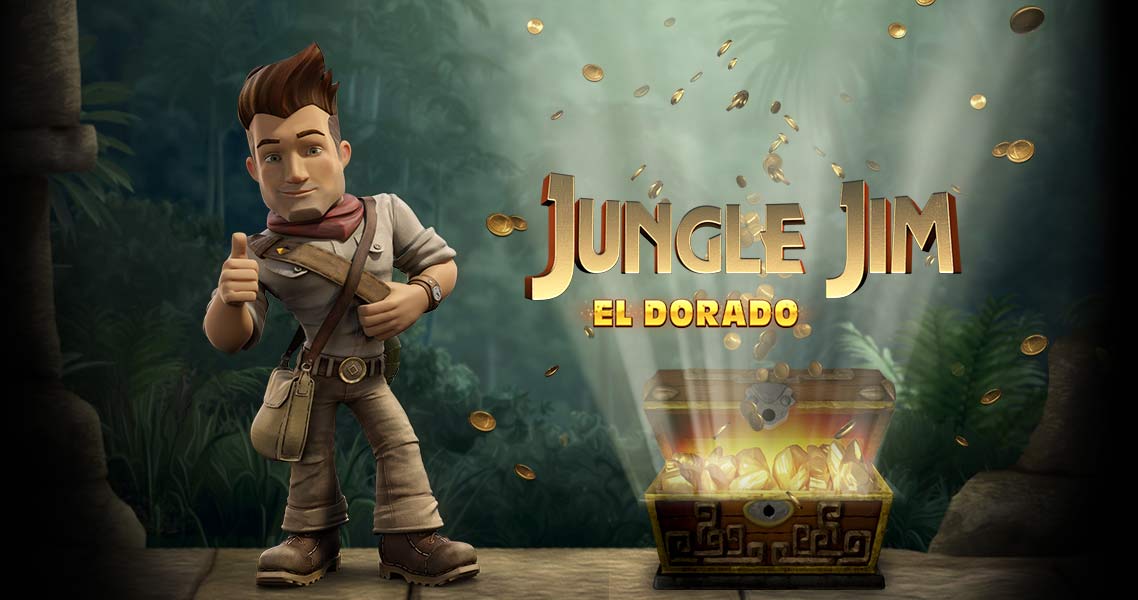 Something that is never going to get old when it comes to slot games is the use of historical moments as an online slot theme, developers just absolutely love doing it. Just think about the number of UK slots using WWII, Vikings, Ancient Egypt or the swinging 60s as inspiration – it is a staggering number!

Microgaming know this more than most, having been a vital part of the online slot industry since the very beginning. Their slot Jungle Jim – El Dorado has turned a lot of heads since its release, exploring a theme predominantly concerned with the Spanish conquistadors fruitless search for the mythical golden city of El Dorado.

If anything this particular theme has got to be the most fitting for an online slot game, as playing it well could result in gamblers securing their very own El Dorado, right from the comfort of their living room sofa.

By this point some more regular online slot players will be noting that Jungle Jim – El Dorado sounds very similar to another slot game on the market, Gonzo’s Quest. Now, we’re not going to lie and say these game’s are completely different, as they are actually remarkably similar, although there are some key differences.

For one Jungle Jim – El Dorado has 25 paylines, 5 more than Gonzo’s Quest. It also has a different central character, and there are no prizes for guessing what his name is here. Oh yes, an endearing cartoon-like character called Jim is our first point of call during Jungle Jim – El Dorado, and he makes sure that the reel spinning experience here is both lucrative and fun.

The main thing people care about, however, is how easy it is to win whilst spinning the reels of Jungle Jim – El Dorado, and, indeed, how much is potentially on offer. Well, let’s just say Microgaming haven’t skimped out on the bonus features, something that means El Dorado might even be in reach here.

Even so, this is such a good looking online slot that many players won’t even have that much of a problem if they fail to win anything. Spinning the reels of an online slot is one thing, but when you are doing it on such a clear and vivid graphical display it really takes the whole experience to the next level. Something Microgaming are more than aware of.

Before you head to this game make sure that you check our new casino promotions to increase your winning chances! 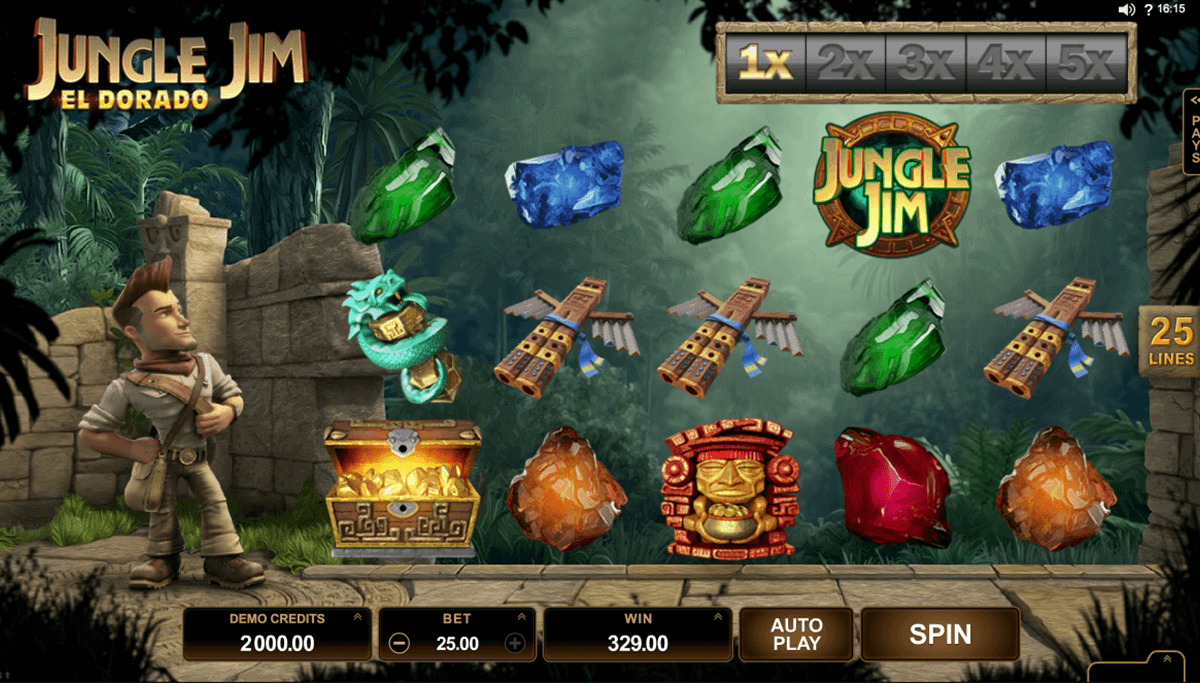 There are a few online slot developers that occupy the higher echelons of the online casino world and have done for years. One of these outfits simply has to be Microgaming, as these guys have genuinely been around since the very start of the online slots craze.

Indeed, this Malta based company were founded all the way back in 1994, so it is more than evident that they have a whole lot of experience under their collective belts. In fact, along with other companies like NetEnt, Microgaming pretty much set the standard for online slots in the 21st Century, and gamblers routinely look to them when trying to find the definitive best slots on the market.

After a few hours playing a Microgaming slot it is easy to see why they are held in such high regard too, as they consistently wed wonderful graphics with exciting themes and more than enough win potential. They are also responsible for some of the most groundbreaking titles over the last two decades.

The Thunderstruck series, for example, was many people’s first ever favorite online slot game, and have adopted a somewhat cult status since their releases. Other games, the incredibly successful Avalon, for instance, are exemplary of Microgaming’s pedigree.

Another thing that people cannot help but love about this developer is the fact that they have by far the most generous progressive jackpot network in the world. Oh yes, the Microgaming Progressive Jackpot Network regularly pays out over a million pounds to lucky gamblers – since when has this been anything but a good thing? 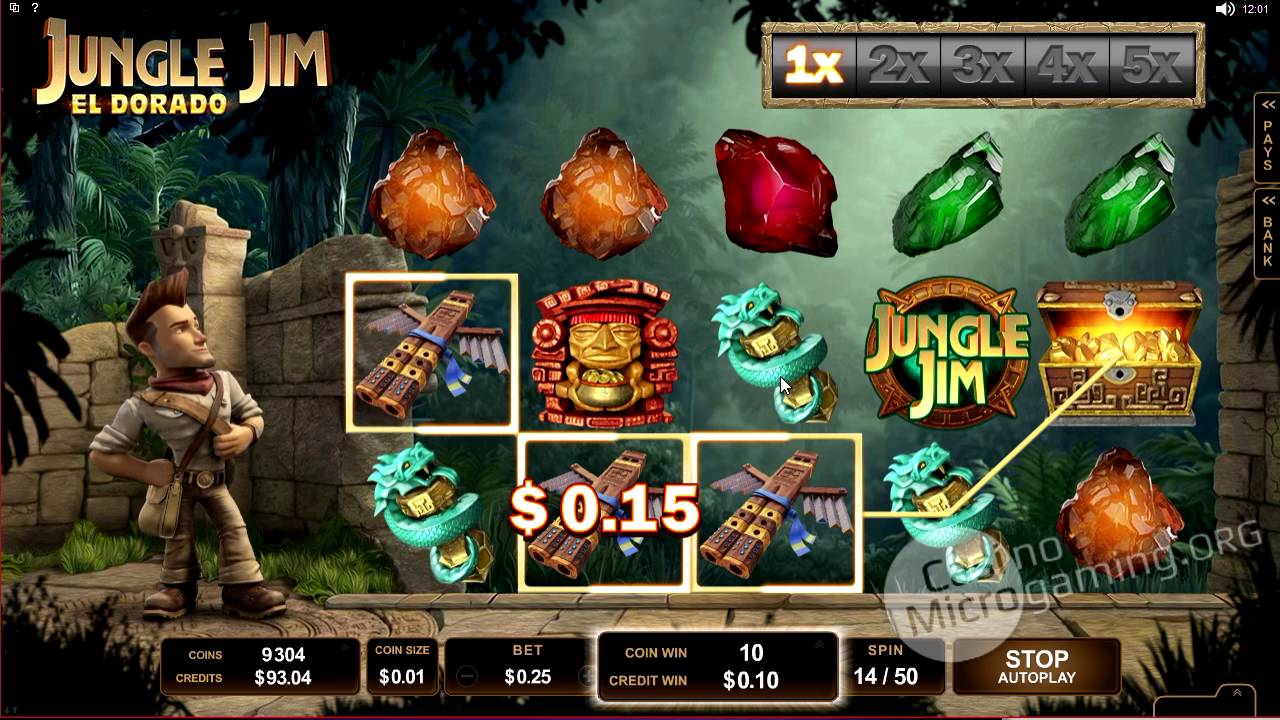 For anyone that has ever played the NetEnt classic Gonzo’s Quest, Jungle Jim – El Dorado will appear to be incredibly similar, especially in the field of aesthetics. The slot takes place in a luscious South American jungle, with our man Jim on hand to help us navigate through the foliage. In a nice touch the 5x3 reel set-up is transparent, meaning the beautiful slot background constantly remains in view. As we mentioned there are 25 paylines here, however they are all fixed meaning that there isn’t quite as much flexibility as we might have liked.

Microgaming show why they are held in such high regard with their assortment of symbols in Jungle Jim – El Dorado, none of which, it is worth pointing out, using the standard playing card symbol icons. Instead there is a whole range of treasure chests, rough uncut stones and other such jungle related treasures.

Something else to get excited by is Microgaming’s inclusion of a rolling reels mechanic during Jungle Jim – El Dorado. This is where winning combinations disappear from the reels after being made, leaving space for new icons to fall from above and make even more combinations. It is a nice touch, and one that makes this slot even more exciting. 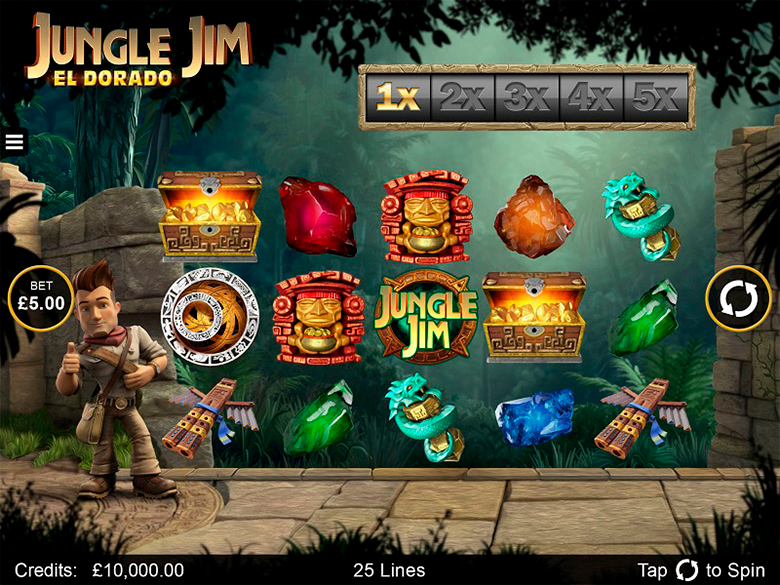 Gamblers absolutely love it when a slot bonus game takes place in a completely different environment to the base mode, and this is exactly what happens during Jungle Jim – El Dorado. Find enough of the scatter symbols and the game screen changes to what looks like an underground treasure vault, quite possibly in the mythical city of El Dorado itself.

There are a variety of juicy prizes up for grabs here as you may well imagine, so it is definitely worth getting to grips with this aspect of the game as soon as you can.

This slot is basically an upgraded version of NetEnt’s Gonzo’s Quest, and is as such a fantastic slot game. Get stuck in! If you enjoyed this game why not also check out Mad Mad Monkey slot?