White Rabbit by Big Time Gaming is based on one of Lewis Carroll’s amazing Alice stories. It is a Megaways slot UK with a beautiful design and awesome features to boot. These include extra wilds, free spins, wild multipliers, the Feature Drop feature where a cash amount of up to 100x your stake is indicated in the meter located below the reels.

The reels here expand to offer up to 248,832 MegaWays. You can enjoy the game on all iOS and Android devices for stakes starting from 10p to £20 a spin. Read below to learn more or start playing now with our UK slot promotions!

How to Play White Rabbit Slot

White Rabbit has an impressive 3D design where the action is set against a wood backdrop with trees and huge toadstools sitting in the background. A lot of Lewis Carroll’s most famous creations spin around the reels during this online slot games rounds.

These symbols include the Red Queen, Dodo, Tweedledum, the Mad Hatter, the Cheshire Cat and Tweedledee. The Red Queen pays the highest reward in the game of 25x your stake when 5 appear on a payline. The wild symbol in the game also rewards a pretty sizeable payout. It can replace all the other symbols except the cupcake, scatter and feature drop symbols.

Some of the features you can enjoy in the White Rabbit slots game include;

Extended reels mean you receive more ways to win. Players can end up with up to 248,832 ways to win if they’re lucky enough to fill all the reels. Once you reach the maximum of 12 symbols on a reel, the Queen’s Reel gets activated. It’s an enhanced reel with an extra Red Queen symbol and wilds appearing.

Big Time Gaming (BTG) gold coins often appear on the reels. They lower the price to enter the main bonus feature. Once the Feature Buy option hits zero, the Rabbit Hole Free Spins feature is triggered automatically. You won’t find this feature in the UK though. 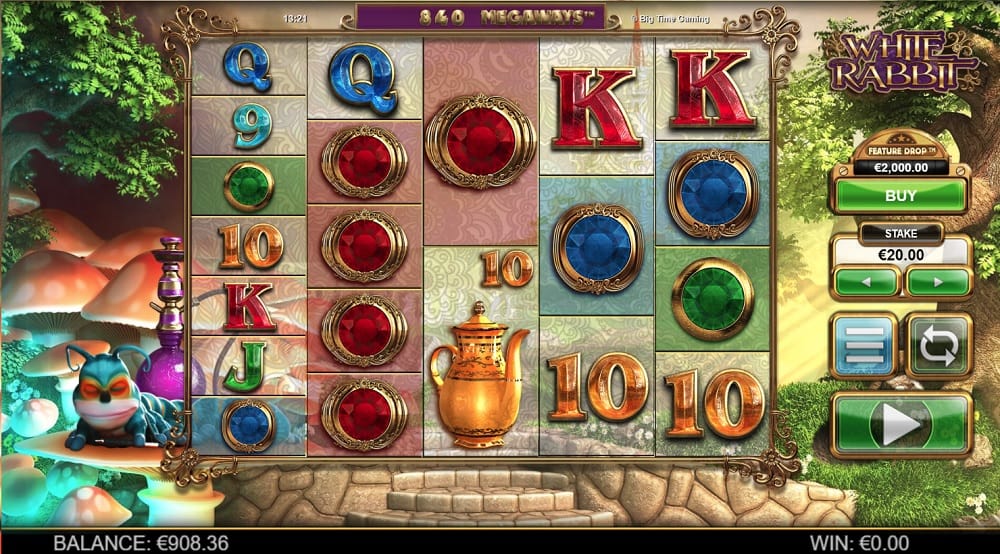 Big Time Gaming is an Australian based company. They have released quite a few online casino slot games like the White Rabbit slot, and have dabbled a little in card games such as Roulette and Blackjack.

The team at Big Time Gaming has grown fairly fast. They have quickly a superior track record when it comes to online casino game development. Company CEO Nik Robinson, CTO Huw McIntosh, and with Ian Schmidt as the Creative Director, you can say the company is definitely equipped for success.

Nik has more than 20 years of casino gaming experience while, Huw has worked in the industry for more than 10 years. Ian, on the other hand, is the creative genius behind some of the most elaborate Rock Star games. You can check out the White Rabbit slot game right here at Slots UK once you sign up and make your first deposit, it is also worth checking out more top slots that we have on offer: 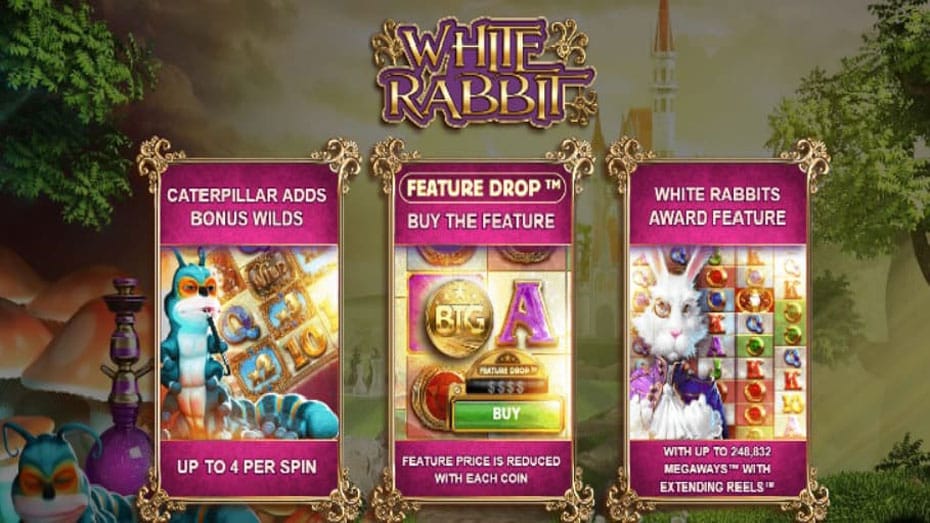 The Verdict on White Rabbit Slots

White Rabbit does justice to Lewis Carroll’s tale. The design is well executed and the Megaways element to the game ensures high impact gameplay throughout. The features on offer definitely add to the excitement of the slot including; the Caterpillar Wilds feature where bonus wilds are added to the reels and double or triple multipliers are applied.

In the Down the Rabbit Hole Free Spins feature, players will receive 15 free spins. In the Extending Reels feature, the reels grow up to 12 high to award extra free spins and winning symbols.  Players can win up to 100x your stake in the Feature Drop feature. The features may take a while to hit, but when they do, you can expect high rewards.

The White Rabbit slot has a medium to high variance where the highest possible payouts go up to 13,000x your stake on a single spin or free spin. The slot has a high RTP of 97.39%. If you enjoy Megaways slots, then you will enjoy White Rabbit by Big Time Gaming. If you enjoy fairytale themed slots, you will also feel right at home here. If you don’t think this game is right for you, why not check out Vikings go Wild slot?