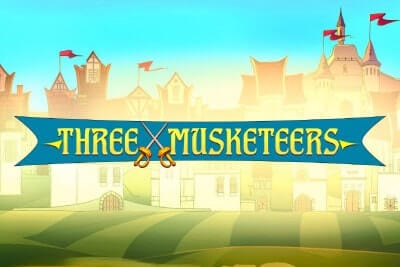 Three Musketeers is an 1884 historical, heroic, and adventure-filled novel by French author Alexandre Dumas in the Swashbuckler genre. Over a decade and a half, since it was released, the novel has remained paramountly significant to this day. The chivalry in the novel is what Athos, Aramis, and Porthos offer in this branded casino slot UK.

One of several UK 3D slot games with a branded theme, the three brave noblemen would fight for you to get your due bonuses. In this regard, a Special feature will unveil them. In the Bar Bonus feature, you'd obtain Porthos symbols, which offer cash values up to 1,000 times your wager.

The Wheel Bonus feature lets you obtain Aramis symbols for you to spin the Wheel for some wins. In the Offer Bonus feature, obtaining Athos symbols would fetch you an offer from him – you can accept or decline. As you play on 5 reels, 4 rows, and 40 pay-lines, you'd be gunning for the maximum 2,000 times wager payout.

Red Tiger is a Malta-based game developer, marketer, and licensor with a rich list of well-acclaimed games in the iGaming landscape. The company has successfully grown its platform so marvelously that it now ranks as one of the best developers around. This comes off as surprising, judging from the fact that the company only started operations in 2014.

The company has leveraged and expanded its competence by ensuring all its games are HTML-5 enabled for players. This makes it possible for the company's games, like other developers, to be played on all internet-enabled devices. Due to its proactive and swift introduction of cutting-edge technologies in gaming, the company has retained some industry-renowned partners.

Today, the company's offerings are recognized and played in several parts of the world, including Europe, Asia, the Americas, etc. Apart from many UK slots, Red Tiger Gaming also has card games, table games, and live games.

The following are some games by this developer:

The above free slots UK and more are always available for free and real money on Slots UK.

With 3 to 5 symbols of the same kind, you would create winning combinations with payouts according to the paytable. Via the Special Feature, the Three Musketeers will also appear as the features in the game. Porthos brings the Bar Bonus feature, which offers cash values when you obtain enough, reaching up to 1,000 times your wager.

Aramis offers the Wheel Bonus feature, where you spin the Wheels to reveal a prize. On the other hand, Athos will provide you with an offer via the Offer Bonus feature. High-value symbols include the Noble Fleur-de-lys, Three Swords of the Three Chivalry men, A Feathered Hat, and a Vessel of Beer.

Low-paying symbols are standard card suits such as Diamond, Spade, Club, and Heart. The French Chivalry emblem is the wild symbol that substitutes all other symbols on the reels to form wins. Also, each of the Three Musketeers would function as wilds when you feel each person's meter.

You can stake on each spin with at least 20 pennies and at most 500 pounds. Play the game on  Slots UK and grab more of the gameplay. 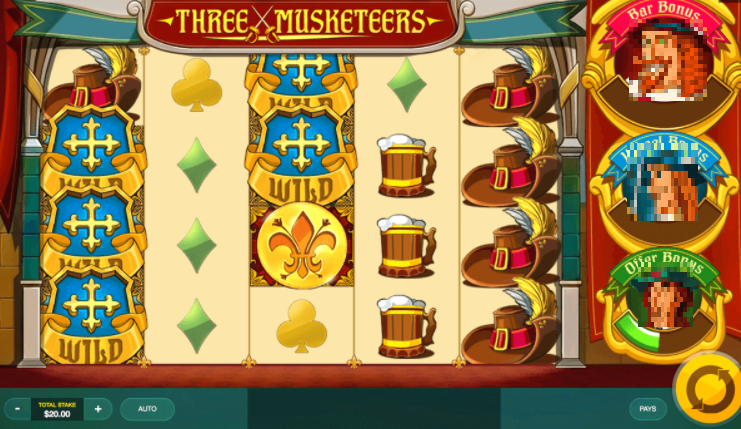 Now, upon a Musketeer filling a meter with feathers, this feature is activated with each Musketeer having his own bonus. These are as follows:

Fill the meter with Porthos symbols and this is activated with symbols on the reels. You are then offered a cash prize that can be as much as 1,000 times your wager.

Here, you spin a Wheel that offers multiplier values ranging from 3x to a whopping 888x.

Upon obtaining sufficient Athos symbols, this feature is activated with a cash offer made to you. You have to accept or decline it and move to the next game.

As already noted, the Musketeers will add wilds to your game, which could make winning positions diagonally, horizontally, or vertically. On the whole, the features can offer maximum wins of up to 2,000 times your wager.

You might enjoy these bonuses when you play on Slots UK today.

Branded slots are always packed with features, and this slot has not made an exception to that rule. The graphics are pleasing and the wager limits can accommodate every kind of player. We don't like that the maximum payout is 2,000 times wager reward, considering the wager limits are high.

If you don't think this is the right game for you, why not try The Wiz Slot instead.